The Sinners by Sourabh Mukherjee

Vikram Oberoi is found dead in his penthouse. A few hours ago, his involvement in a sex scandal in NexGen Technologies made headlines across the world.

Who is behind the sinister conspiracy that destroyed Vikram Oberoi, the philandering India Head of NexGen? Rivals within and outside the firm? One of his many jilted lovers or the miffed wife? A mysterious conspirator laying out honey traps to sabotage his plans? Or, is it the ghost of a sinful past that continues to haunt the Oberois?

The Sinners is a fast-paced thriller with a shocking twist that unravels against the backdrop of corporate warfare, illicit relationships and ruthless seduction games.

Agastya picked up the call from a private number after the third ring, taking his eyes off the monitor in front of him.

“Is this Agastya Bakshi?”

“Agastya, my apologies for calling you late. I assure you this won’t take too long. But, we need to talk in private. Where are you right now?” The male voice at the other end of the line sounded authoritative. Agastya could not recall having heard the voice earlier.

Agastya looked around the near-empty office and said, “I am at work, but we can talk. Not too many people around at this time of the night.” His curiosity, by this time, was at its peak.

It was past eleven. It was the third time that week that Agastya had to work through the night. Hired a couple of years back, his work as an engineer in the Network and Systems Division of NexGen kept him rooted in front of computer screens through his days and very often, his nights. Agastya did not have much of a social life. A clumsy desk littered with pizza crumbs, empty cartons and soda cans, and a paunch growing at an alarming rate – that was what his life had been reduced to. But, he did not complain. Agastya loved his job.

“Great! Then let’s talk business. I’m sorry I cannot disclose my name. I belong to a private investigation agency that’s currently looking into the dealings of the company you are working for. There are reports of certain financial irregularities in the business.”

Agastya sat up straight in his chair.

“Okay! But, what – what do you want from me?” Agastya asked tentatively. “I work in Network and Systems. I don’t think you have the right number!”

“Agastya, I know who I am talking to,” there was an almost imperceptible hint of annoyance in the voice of the man at the other end of the line. He went on, “We need access to the e-mail accounts of some of the top guys in your company to check their correspondences. And I’ve been told that you are the right man for the job.”

Agastya took a sip of the cola that had already gone flat.

The voice at the other end of the line did not let him finish.

“Agastya, this is a covert operation and we are a private agency. We cannot turn up at your office with an order to gain access to these accounts. Also, right now, we’re not sure how many of the big guys are involved and in what ways. For all you know, your boss – the Systems Manager you are referring to – might as well be a party! Let’s not forget that, he has access to all records of transactions. We do not want anyone getting alert and tampering with the data we are looking for. We cannot risk exposure. It’ll take us some time to complete the basic investigation. And I’d really appreciate your cooperation while we are at it. Once we have enough evidence at our disposal, we will make this official.”

Agastya thought for a few minutes. The whole thing could be a hoax, for all it’s worth!

“I knew you’re going to ask, Agastya. We’ll be completely transparent with you. One of my agents will get in touch with you. You’ll be working with her. I want you to hand over the details to her in person. This is for reasons of safety. And also, to make sure that you put faces to names. We want to win your trust and make sure that you are comfortable working with us because, as I said, this investigation isn’t going to get over in a day. We’ll need to work together for a while.”

“We’ll most certainly compensate for your time and your cooperation. And I can assure you that, you will have no reason to complain about the money. Don’t worry about that,” the voice sounded reassuring. Agastya did a quick mental calculation of the remaining EMIs for his new car. Almost at the same time, the full front-page advertisement of the upcoming apartment complex in South Mumbai flashed before his eyes.

The voice continued, “So I gather we’re good to go here, right?”

The voice did not seem to care.

“Thanks for your co-operation, Agastya. Ruchika will get in touch with you shortly. Have a good rest of the night at work.” The man hung up.

Agastya looked disbelievingly at his phone. Agastya wondered if he should call someone and discuss. The next moment, he decided against it. The man did sound like he meant business. And, in any case, Agastya was the one in charge. He was the one who had access to the data the agency was asking for. He was willing to give it a shot if the money was good. If, at any point in time, he had any reason to doubt the authenticity of the agency, he could always step back. Maybe even report the guy to appropriate authorities. He could always make an honest confession.

He put the phone down on his desk and went back to monitoring the data backup jobs. In a couple of minutes, his phone buzzed

“Hey, this is Ruchika” – said the Whatsapp message. 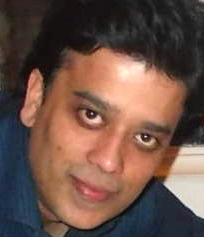 A keen observer of human behaviour and cultural diversities, Sourabh loves travelling and has travelled widely across five continents. An avid reader of fiction, Sourabh is equally passionate about photography, movies and music.

Connect with the Author:

A Paperback Copy of The Sinners by Sourabh Mukherjee.