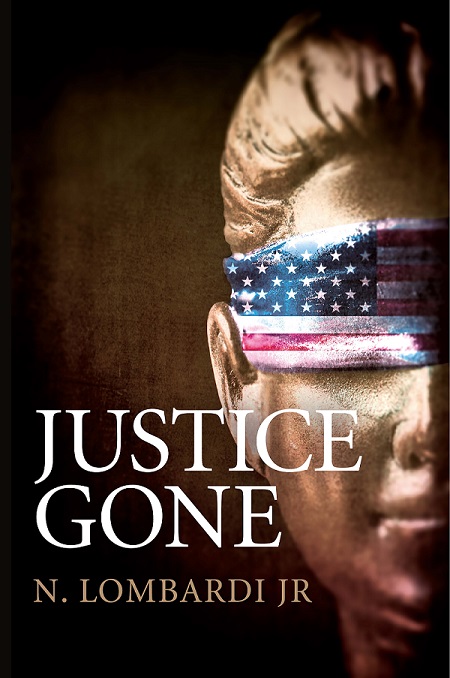 When a homeless war veteran is beaten to death by the police, stormy protests ensue, engulfing a small New Jersey town. Soon after, three cops are gunned down. A multi-state manhunt is underway for a cop killer on the loose. And Dr. Tessa Thorpe, a veteran’s counselor, is caught up in the chase. Donald Darfield, an African-American Iraqi war vet, war-time buddy of the beaten man, and one of Tessa’s patients, is holed up in a mountain cabin. Tessa, acting on instinct, sets off to find him, but the swarm of law enforcement officers get there first, leading to Darfield’s dramatic capture. Now, the only people separating him from the lethal needle of state justice are Tessa and ageing blind lawyer, Nathaniel Bodine. Can they untangle the web tightening around Darfield in time, when the press and the justice system are baying for revenge? Justice Gone is the first in a series of psychological thrillers involving Dr Tessa Thorpe, wrapped in the divisive issues of modern American society including police brutality and disenfranchised returning war veterans.

The funeral services, particularly the burial, had been announced as private and that sympathizers should remain at a discreet distance; and in a demonstration of exemplary respect, the hundreds of supporters complied with the request.

Family and comrades, especially those from the New Hope Clinic, were designated to be at the gravesite. An uninvited guest, surprisingly, was also among them: John Garson, Police Chief of Bruntfield Township.

After the lowering of the coffin, and the slow deliberate departure of the mourners, Garson slipped away, in the opposite direction that everyone else would follow toward their cars and hired limos: crossing fields of gravestones until he reached the coppices of oak trees, in order to escape the press.

Everyone else present merged into the group of activists who assembled at the gate of the plot, all intent upon making known the measure of their sorrow to the public.

The crowd that participated was moderate in numbers, but in no way insignificant—about seven hundred were reported to have shown up. They marched, waving their signs and chanting slogans, from the central commercial district to the Bruntfield Veterans Memorial Park, where a makeshift stage had been set up for the guest speakers. The local TV stations from Newark and Trenton, including the network affiliates, were present covering the march.

The whole thing was fairly orderly, despite the loud chants of “Justice for Jay” and the cardboard signs that said: WE DON’T WANT KILLER COPS, SHAME ON YOU, PROTECT NOT KILL, PUT THE ANIMALS BEHIND BARS. Police presence was minimal and subdued.

Once they arrived at the previously setup podium in the park, representatives of the various groups got their chance to express their views with the condition of keeping it short, and as per Marshal Felson’s request, focused on the incident. The fact that Jay Felson was approached by police when he was not in the act of committing any crime was stressed on more than one occasion. The TV crews covered the speeches with utmost diligence, as this was one of the highlights to be expected. Finally, for the emotional touch, the organizers called on the young man’s father.

“We are here today to let the city authorities know that we will be following very closely the grand jury proceedings!” Marshal Felson shouted. “That we, as a community, will not just brush this aside. I am grateful to all of you who have shown concern and have voiced their support for my son.” He gave up the mike and walked off the stage amid cheers and applause.

A rather frail-looking young man with glasses took control of the audience to announce that Dr. Tessa Thorpe from the New Hope Trauma Recovery Clinic was to be the next speaker.

Tessa had given much thought as to how she should dress for the occasion. Her first instinct was her Karen Kane pants suit, but dismissed that idea to wear her copper-brown print kaftan in its stead.

Now, with its folds caught in the vigorous September breeze, giving the illusion of a multitude of miniature flags fluttering around her, her thick locks of hair dancing around her head, she spoke to the crowd, slowly, deliberately taking her time. “Hello, my fellow citizens.” She stopped to survey the mass of people standing in front of her. Dramatic pauses replete with eye contact, if not overdone, were quite effective in getting one’s message across. Not surprisingly, Tessa knew how to get her message across, a special art in the realm of behavioral scientists. Public relations firms, advertising companies, political campaigns, all hired an army of psychologists to sell a product. And Tessa Thorpe, as someone who had thirty years’ experience as a criminal psychiatrist, could sell as well as any of them. “We are here today for two reasons, two very important reasons that are essential to our well-being in a modern society. Freedom is one, and justice is the other.”

“When the call for war came, we were told that our enemies hated our freedoms. We were told that the citizens of Iraq had been held hostage by a ruthless dictator who denied his own people these freedoms. Our invasion of that country was sold to us as Operation Iraqi Freedom. And so we sent our young men and women off to war, the most traumatic experience a human being could ever go through, with the belief that they were fighting for liberty and freedom. And yet, one of those whom we had sent…had come back to us only to have his own freedom denied. His single offence at the time he was approached by law enforcement officers was that he was exercising his freedom to stand on a street corner.”

This elicited a roar from the crowd.

“This is not merely tragic, it is an act of deplorable fraud, being denied the very thing he fought for!”

“When I was young, we were made to pledge allegiance, an oath that ended with the phrase, ‘with liberty and justice for all.’ Well, Jay Felson was denied liberty…let us make sure he is NOT DENIED JUSTICE!”

An ear-shattering reverberation of concurrence.

Having descended from the little platform with the crowd still shouting in endorsement, Tessa was serially embraced by her coworkers: Casey, Ed, Penny…all with praise about her wonderful speech, culminating in Marshal Felson’s hug, whispering into her ear, “Amazing.”

The next event on the program was to go together to the site where Jay was killed at the bus depot in order to lay memorial flowers and gifts. The TV teams followed, instinctively knowing that this was indeed another newsworthy item. In fact, as a human interest story, it tugged at the heart to see the gift bearers laying their offers down. And what made it even more poignant was the huge bloodstain that had yet to be cleaned off the pavement, a crimson smear that drew numerous zoomed-in shots by the camera crews.

Lombardi Jr, the N for Nicholas, has spent over half his life in Africa, Asia, and the Middle East, working as a groundwater geologist. Nick can speak five languages: Swahili, Thai, Lao, Chinese, and Khmer (Cambodian).

In 1997, while visiting Lao People’s Democratic Republic, he witnessed the remnants of a secret war that had been waged for nine years, among which were children wounded from leftover cluster bombs. Driven by what he saw, he worked on The Plain of Jars for the next eight years.

Nick maintains a website with content that spans most aspects of the novel: The Secret War, Laotian culture, Buddhism etc.

His second novel, Journey Towards a Falling Sun, is set in the wild frontier of northern Kenya.

His latest novel, Justice Gone was inspired by the fatal beating of a homeless man by police.