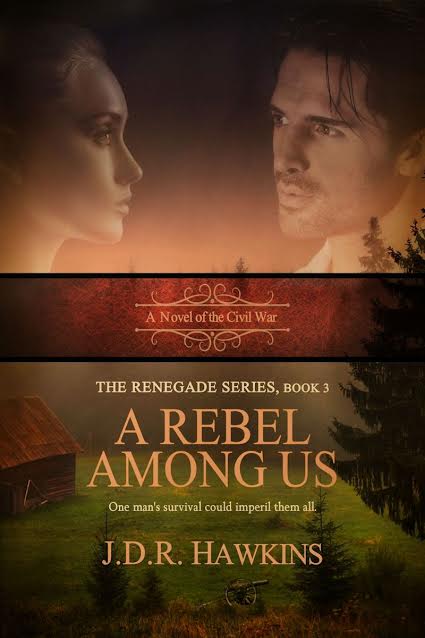 Some people just don’t know how to be gracious, and Maggie is one of them. Here is an excerpt from my novel, A Rebel Among Us. Enjoy!

The little girls were up before dawn, pounding on doors, rousing everyone awake, and gleefully yelling “Merry Christmas!”

David groggily sat up. He heard Maggie’s voice on the other side of the door.

“Where’s the fire?” she asked.

He heard Anna say something and pulled himself out of bed. The group had already gone downstairs, so he followed after them and entered the parlor. Rubbing sleep from his eyes, he saw Sarah lighting a fire.

“Fifteen minutes past five,” said Grace. She tightened her robe around herself. “Oh! It looks as though Santa has been here, all right.”

The girls ran to the fireplace, yanked down their stockings, and dumped the contents out onto the rug, gasping at the sight of their bounty. Each one had received two peppermints, a gold coin, and a licorice.

Maggie had already started distributing gifts from under the tree. She called out the name on each package while Claudia and Abigail took turns delivering them to their recipients. Handing her aunt the last remaining present, she seated herself beside the fireplace. Everyone began opening gifts.

With a smile on his face, David watched the sisters, Grace, and Claudia exchange gifts with each other.

“Go on, David. Open yours,” Sarah coaxed him.

He drew the boxes toward him and eagerly tore into them. A package from Maggie and Abigail contained new boots. Amazed, he humbly thanked them. Another gift contained everyday clothes Sarah had sewn for him, and still another held a new pair of calf-skin gloves from Claudia and her mother. Anna gave him a book and several pair of socks.

She opened his gift. David held his breath, hoping she would be impressed by his handiwork. He had specially crafted for her a comb and hand-held looking glass made of Cherrywood with intricately carved angels on them.

He didn’t either, so he nervously waited for her to continue.

“They’re absolutely breathtaking!” She dragged the comb through her long blonde hair, gazing at her likeness in the mirror.

David thought he could watch her do that for hours on end and smiled at his accomplishment. He had managed to impress her. His heart soared.

“Oh, it’s lovely.” Sarah smiled. She held up the broach he’d carved for her. Tiny birds adorned the front of it.

“Glad you like it, Miss Sarah,” he replied with a shy grin.

He gave a similar one to Grace. Abigail and Claudia opened their gifts from him: miniature carousels with interchangeable animals. They happily thanked him and traded animals, seeing if one would fit into the other’s carousel.

Maggie opened the gift he had created for her to reveal a three-dimensional wooden carving of a girl sitting in a chair with a cat curled around her feet. “It’s a girl with a cat,” she flatly remarked.

He grinned back at her.

Maggie turned the wooden carving in her hands for a moment. Glaring at David, she threw it into the fire.

David watched in shock. His jaw dropped in disbelief, and his eyes grew wide. The carving he had spent hours on, created especially for her, was quickly consumed by flames.

“Maggie, how could you?” Anna scolded.

He gaped at her, stunned. Maggie glared back at him. Coming to his senses, he scowled and jumped to his feet. Hurt and anger flared up inside him.

“Pardon me, ladies,” he said, quickly walking toward the kitchen.

He heard Anna holler at her sister. The screen door slammed behind him. Dawn was just beginning to illuminate the yard. Anxious to distance himself, he sprinted toward the barn.

“David,” Anna yelled as she ran after him. “David, wait!”

She screamed. He turned to see she had fallen onto the cold, snow-covered ground. His heart lurched.