I Received My Author Copies! 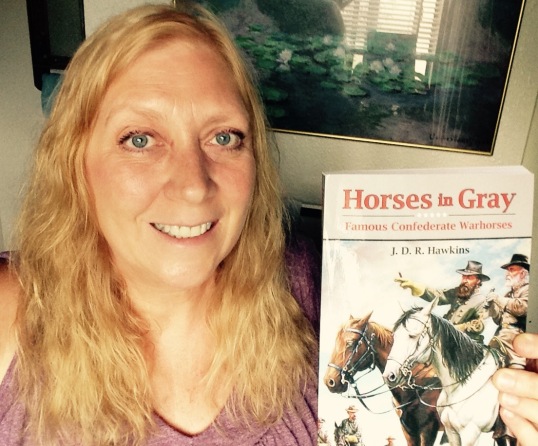 My new book, Horses in Gray, premiered last weekend at the SCV Convention in Memphis, and today, I received my author copies! This is such an exciting experience for me to share with you. Getting this book published has been a roller coaster ride. I started writing it five years ago, and after moving three times, I finally finished the manuscript. I searched around and discovered a small press who was willing to publish the book. Several months later, the manuscript had been edited, formatted and indexed. It was finally ready to be published! But just as it was about to go to press, the publishing company folded. I was heart-broken. Now it was back to square one.

I put on a brave face and sent the manuscript to a few companies who publish Civil War nonfiction, but I only got reject letters back. Then I sent it to Pelican Publishing, and they accepted it! One year later, my book is finally seeing the light of day!

This is my first nonfiction book, and I am very proud of it. Here is an excerpt from Chapter One:

Most horses used in the war were geldings or mares. Not many stallions were utilized because they were unruly and hard to handle. For ambulances, horses were used rather than mules because horses were less skittish.1

At the start of the war, Southern gentry considered Thoroughbreds to be superior. They were certain that the quality and breeding of their fine racehorses would assure the Confederacy’s victory.

One newspaper article printed in 1863 read: “Let the baser baseness of breeding scrubs and cold bloods be left to the Yankees: and let Virginia planters resume [breeding] the thoroughbred Virginia race horse.”2

It didn’t take long for Confederate soldiers to figure out that Thoroughbreds were too flighty for use on the battlefield. Instead, various other breeds were used. Percherons were preferred by the Confederate artillery for pulling heavy caissons and wagons. Saddlebreds from Virginia, Tennessee, Kentucky, and Missouri, as well as Tennessee Pacers (Southern Plantation Horses), the forerunners of today’s Tennessee Walking Horses, were ridden by the cavalry.

Gen. Basil Duke, second in command to Gen. John Hunt Morgan, was the first to describe the Saddlebred breed: “If I be correct in my estimate of the Thoroughbred, then it must be conceded that the nearer he approximates him, the better another horse (the Saddlebred) will be. But the Kentucky Saddlebred horse has not only inherited, in a large measure, the excellence of the Thoroughbred in respects to which I have called attention, but has also retained certain desirable characteristics which have more peculiarly distinguished the humbler (non-Thoroughbred) strain from which he is descended.”3

The desirable characteristics to which Duke alluded were “the peculiar gaits which make their descendants so valuable for the saddle.”4 However, Morgans were the most popular riding horses used by officers and horse soldiers alike.

Morgans were one of the earliest breeds to be developed in the United States. They can be traced back to their foundation sire, Figure, born in 1789 in Springfield, Massachusetts, and later renamed Justin Morgan after his owner. The breed is smaller than the Thoroughbred and possesses a stocky body, sturdy legs, and a long, thick mane and tail. Morgans are alert, easy keepers, sustaining on little food compared to other breeds.

Used primarily for riding and harness racing, they also served as coach horses. Because they were accustomed to pulling vehicles and were able to keep calm under fire, both armies used the breed extensively during the Civil War.

During the war, bays were the most common in terms of color. Bay horses are distinguishable by their brown coats and black points (i.e. black manes, tails, and lower legs). Browns were the second-most common, followed by chestnuts and blacks. Next in line were horses whose colors ranged from gray to white, followed by roans, which have white and any other hair color intermixed throughout their coats. Most armed forces did not use pintos, spotted, or white horses, since they believed the animals would be easy targets, but some soldiers took a chance and rode them anyway. Grays were used by trumpeters so that officers could easily locate them when they wanted to have a call blown. Musicians also rode grays.

Horses came to recognize the different bugle calls used during the war. The call to trot or gallop was synchronized with the rhythm of the horses’ hoof beats in those gaits. The animals also recognized certain songs, a favorite of theirs being “Stable Call” because when they heard the music, they knew it was time to eat:

Oh, go to the stable,

All you who are able,

And give your poor horses some hay and some corn.

The colonel will know it,

And then you will rue it as sure as you’re born.5

Gen. James Ewell Brown Stuart (known as Jeb) had an immense love of music and assembled a band of talented musicians to entertain his division as they marched long miles. Some horses in his cavalry grew so accustomed to the melodies that they responded by prancing in rhythm to the tunes.

Here is the Amazon link to purchase the book:

I am looking for reviewers, so please let me know if you are interested. Also, if you know of someone who might want to endorse the book and have their quote on the cover, send them my way!

2 thoughts on “I Received My Author Copies!”