As of late, any Confederate monument is now fair game to dishonor, deface, or destroy. This even applies to a monument erected to honor Father Abram Joseph Ryan. Words cannot convey how despicable all this anti-Confederate sentiment is to me. It only goes to show how truly ignorant this country is about those who served during the War Between the States (and yes, they were American war veterans). 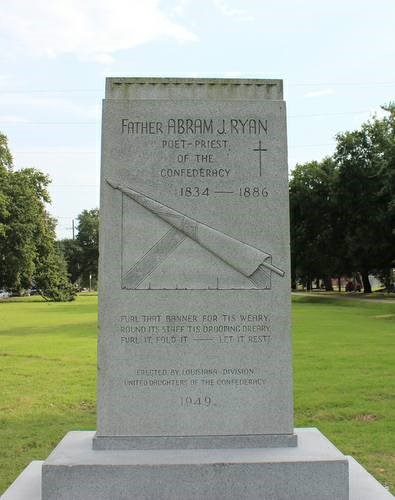 On Wednesday, the group published a photo of the spray-painted monument on a blog called, “It’s Going Down,” a site that describes itself as an anonymous outlet for groups with “anarchist, anti-fascist, autonomous anti-capitalist and anti-colonial movements” to “publicize and promote revolutionary theory and action.”

The monument was erected in 1949 by the Louisiana Division of the United Daughters of the Confederacy (UDC) in honor of Father Abram Ryan, a poet and chaplain of the South during the Civil War.

It is located in the 400 block of Jefferson Davis Parkway and depicts a furled Confederate flag, along with the inscription “Furl that banner for ’tis weary, Round its staff tis dropping dreary, Furl it, Fold it — Let it rest!”

It has been less than one week since all four Confederate monuments were removed from the New Orleans cityscape. Though Mayor Mitch Landrieu’s targeted statues have come down, removing the remaining traces of the “Lost Cause of the Confederacy” seems to have become a civilian guerilla cause.

An organization called the Real Meow Meow Liberation Front – Professional Party Planning Committee took to It’s Going Down, an “anarchist, anti-fascist, autonomous anti-capitalist and anti-colonial” online organization website, to take credit for the recent vandalization of a monument dedicated to Father Abram Ryan. The Front’s plan was to target the monument for “popular removal.”

The anonymous author alleged that Mayor Mitch Landrieu passed the proverbial torch to the group to champion the anti-Confederate monument cause. “Tired of the smoke and mirrors of the city’s earlier removals,” wrote the poster, “Mitch contracted us to help arrange a more participatory spectacle for the removal of the remainder of the cities more odious monuments.”

The Press Secretary for the Office of Mitch Landrieu confirmed with NoDef that all allegations made by the anarchist group involving the Mayor were false.

Abram Joseph Ryan was a poet, Catholic priest, and activist for the Confederate States of America, known as the “Poet Laureate of the Confederacy.” His most notable works are centered around the Confederate cause, including “The South,” “C.S.A.,” “The Sword of Robert Lee,” and his most famous work “The Conquered Banner.”

The monument, located along Jefferson Davis Parkway, was erected in 1949 by the United Daughters of the Confederacy.

This is not the first instance of vandalization in reaction to the monuments controversy. In early May, the Joan of Arc statue in the French Quarter was tagged with the phrase “Tear it Down.” Two men were arrested in the hours following the dismantling of the P.G.T. Beauregard monument, who spray painted the base of the statue with a message in memoriam for the Confederate General.

The statue located on the 400 block of Jefferson Davis Parkway was splashed with red paint, featuring an anarchist symbol. The RMMLF-PPPC also left behind a hammer and chisel “for your pleasure,” they wrote in an effort to have community members take part in a grass roots take down. “So come one, come all! Take a few whacks! Carve your name! Chisel a penis! Mind the wet paint and have fun!”

In addition to his monument, Father Ryan also has a stained glass panel memorializing him at the Confederate Memorial Hall Museum, also in New Orleans.