Lawsuit in the Works

Recently, I reported how the city of Charlottesville plans to remove a statue of Robert E. Lee from Lee park. They also want to rename the park. But now, several citizens have filed a lawsuit claiming the city is acting unlawfully.

FIGHTING BACK IN VIRGINIA
Dixie Heritage Readers in Virginia are fighting the City of Charlottesville over City Council’s decision to move a monument to Confederate Army General Robert E. Lee.
Councilors voted 3-2 on February 6 to move the statue of Lee out of Lee Park. They also unanimously voted to rename the park.

Descendants of its donor, Paul Goodloe McIntire, and sculptor are a part of this lawsuit against Charlottesville and City Council. Joining them in their lawsuit are The Monument Fund, Inc. and The Virginia Division of Sons of Confederate Veterans, Inc. and eleven individuals: Frederick W. Payne, John Bosley Yellott Jr., Edward D. Tayloe II, Betty Jane Franklin Phillips, Edward Bergen Fry, Virginia C. Amiss, Stefanie Marshall, Charles L. Weber Jr., Lloyd Thomas Smith Jr., Anthony M. Griffin, and Britton Franklin Earnest Sr. Their attorneys filed their lawsuit in Charlottesville Circuit Court Monday, March 20.
The plaintiffs’ suit alleges Councilors acted beyond their authority and violated a State Law which prohibits removing monuments or memorials to war veterans:
That the Lee statue and the Jackson statue are Confederate monuments and memorials of the War Between the States protected by the provisions of Section 15.2-1812 of the Code of Virginia, 1950, as amended.

The lawsuit also argues Charlottesville is violating terms of McIntire’s gift in 1918 of the land for Lee Park and the statue:
“Defendants [Charlottesville City Council] are required by law to protect and to preserve the aforesaid historic monuments.”
Weber, one of the plaintiffs and an attorney, says he joined the suit in order to protect history and the law. “I believe that our history is what it is. We don’t change it. We have to deal with it, and we have to come together to deal with it,” he said.
Don Gathers, who chaired the Blue Ribbon Commission on Race, Monuments and Public Spaces, said that he expected their decision would face a legal challenge and the City is prepared to fight for the monument’s removal.
(Courtesy Dixie Heritage Newsletter, March 24, 2017 ed.) 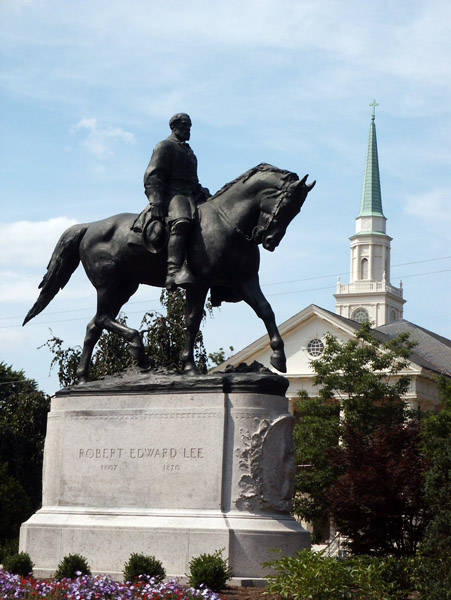