With all the attacks on anything related to the Confederacy, there are some things that are still being held intact. The following letter describes one of these instances. Although J.E.B. Stuart’s birthday anniversary was last week, I just received this letter, and I think it’s a wonderful victory. What do you think? 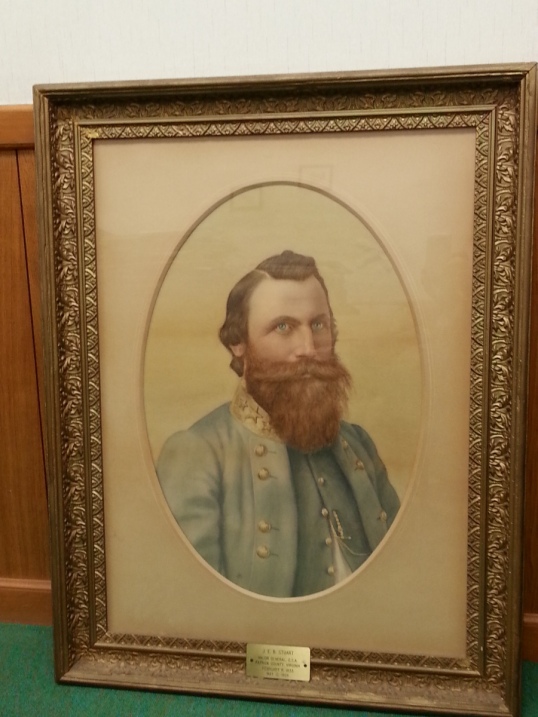 JEB Stuart Portrait Returns to Display in Patrick County Building
Shortly after Patrick County Judge Martin Clark committed the disgraceful  act of having a portrait of Patrick County native and Confederate General J.E.B. Stuart removed from the Patrick County Courthouse, and following a swift and very vocal outcry of disgust with Judge Clark’s action by her citizens,  the Patrick County Board of Supervisors voted  to display the portrait on the “Wall of Honor” on the second floor of the Patrick Veterans Memorial Building. The portrait has been restored and encased in special glass, and a new bronze plaque has been installed.
Tomorrow, Thursday, May 12th, the J.E.B. Stuart Birthplace Preservation Trust will host an official and public unveiling of the portrait, on the anniversary of his death.  The ceremony will take place at 10:0 a.m. and will include Patrick County and town of Stuart officials, Stuart family members, and JEB Stuart re-enactor Wayne Jones, who organized and led a rally to protest the removal on the Courthouse steps shortly after the portrait was removed, and who will be a guest speaker at the event.
The ceremony is open to the public. The Patrick Veterans Memorial Building is at at 106 Rucker St. in Stuart, Virginia.
In this case, the PC attempt by Judge Clark to remove a beloved hero and Patrick County son from public view failed miserably, and has led to the portrait being restored and put on display in another public building where it can be seen by even more citizens.
Please take a moment to thank the members of the Patrick County Board of Supervisors for their efforts in having the portrait installed on the Wall of Honor, and their courage in going against the popular trend to dishonor our veterans.
Contact info here:  http://www.co.patrick.va.us/county-supervisors
https://mtairynews.com/news/40582/stuart-portrait-to-be-unveiled
God bless the memory of Gen. J.E.B. Stuart, and God Save the South!
Virginia Flaggers
(Courtesy of Southern Heritage News & Views, May 16, 2016 ed.)