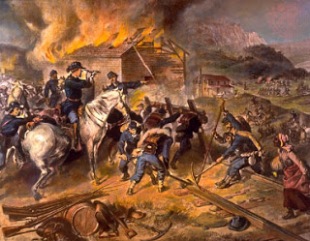 On this date in 1865, Union forces under General William Tecumseh Sherman continued their march of devastation, reaching Columbia, South Carolina. Because it was the first state to secede from the Union, soldiers felt a deep-seated vengeance, so they burned the city to the ground. The previous winter, they had gone through Alabama and on to Georgia, burning Atlanta and capturing Savannah before Christmas. The rampaging soldiers’ path spanned 60 miles wide. They burned, pillaged, and destroyed everything in their path. Their behavior was explained away by Sherman as waging “total war” against the enemy.

Sherman was a serious racist, and although the Union supported emancipation, most soldiers didn’t. This was proven during the march, when Sherman ordered his men to destroy a bridge, leaving behind freed slaves who had followed them. The freedmen were so distraught over being left behind that many jumped into the river, and because they couldn’t swim, hundreds drowned.

Sherman’s soldiers would continue north, tying up with General Ulysses S. Grant’s men as they laid siege on Petersburg. By early April, they would take the Confederate capital of Richmond as well, and force General Robert E. Lee to surrender his Army of Northern Virginia.