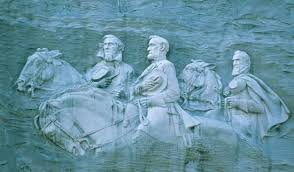 Believe it or not, a recent petition was filed to remove the impression of three famous Confederate generals off the face of Stone Mountain in Georgia. This carving, a well known, famous landmark in Georgia, is the largest bas relief sculpture in the world, and its history is rich. The man who was initially commissioned to do the carving of Confederate President Jefferson Davis, General Robert E. Lee, and General Stonewall Jackson, was Gutzon Borglum, who abandoned the project in 1925. He later began work on Mount Rushmore. The project was taken over by several other sculptors until its completion in 1972.

According to Sons of Confederate Veterans #1452 newsletter, a petition has been filed online by McCartney Forde, who considers the sculpture to be offensive, as well as a continued honor given to Confederate leaders as an affront to those their government kept in slavery.

“It’s almost like a black eye or an embarrassing smudge on our culture,” McCartney Forde told 11Alive News. “My efforts aren’t to just destroy something, ’cause I understand that does mean something to some people,” he said. “But there should be some room for compromise and there should be something up there that we all could be proud of,” he added.

With only 35 signatures supporting his petition thus far, Forde admits the response to his drive to wipe Stone Mountain clean has been overwhelmingly negative.