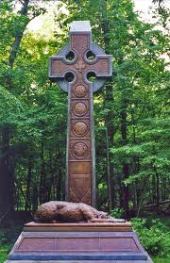 Most Civil War buffs know about the infamous Irish Brigade, the 69th New York Infantry Regiment that fought at Gettysburg and numerous other battles. The brigade was led by Colonel Joseph Kelly. “Kelly’s Brigade,” the “Fighting 69th,” still exists to this day. But many Irish immigrants fought for the South as well. It is estimated that 30,000 Irishmen fought for the Confederacy.

On September 1, 1861, the 10th Tennessee Infantry Regiment enlisted. Known as the “Rebel Sons of Erin,” these men consisted primarily of Irish-Americans. Some of their surnames included Brennan, Brien, Conley, Dougherty, Fitzgerald, Haley, Kelly, McKenny, McNichols, Murphy, O’Sullivan, Riley, Ryan, and Sullivan, to name a few. The regiment was led by Colonel Randall McGavock, whose parents emigrated from Ireland in the 1820’s. McGavock was killed at the Battle of Raymond.

Patrick Cleburne, who was probably the most recognizable Irishman to fight for the Southern cause, died during the Battle of Franklin in Tennessee. Cleburne, an Irish immigrant who was born in County Cork, was known as the “Stonewall of the West.” Robert E. Lee referred to him as “a meteor shining from a clouded sky.” Other famous Irishmen who served for the South included Reverend Abram Ryan and Chaplain John Bannon.