Archive for the tag “seances” 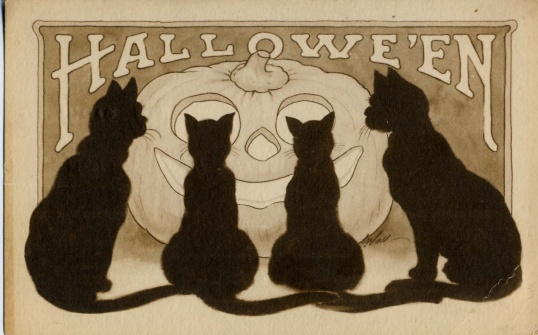 All Hallows Eve has finally arrived, the night when we celebrate all things unworldly, undead, unholy, and unknown. Or in other words, the night when kids can load up on free candy without fear of repercussions!

So many soldiers died during the Civil War (620,000) that a kind of spiritual revival took place in America. Victorian culture was odd in many respects, but some traditions have remained, like wearing black to funerals, although this tradition is gradually going by the wayside. The Victorians liked to make “wreaths” from their loved ones’ hair, cover their windows with black curtains when someone died, and send out postcards with deceased family members displayed in their coffins. Wearing black for a year after a loved one died was expected. During that time, communicating with the dead became a huge fad, and provided closure. (Many soldiers were MIA’s – their families never knew what happened to them.)

Seances became fashionable, and famous celebrities of the time participated. Ouija boards were popular, as were “spirit tables,” and many shady characters took advantage of mourners. Photographers of the day made a “killing” by experimenting with special effects to make it look like spiritual entities were lurking in the tintypes’ backgrounds. What we now consider to be spooky, Victorians considered seances to be consoling and intimate.

If you dare, you can participate in a Victorian seance at various locations around the country. The most popular place, of course, is in Gettysburg. It won’t take much effort to summon ghosts there.