Archive for the tag “Rock Island”

Sioux Falls and the Civil War 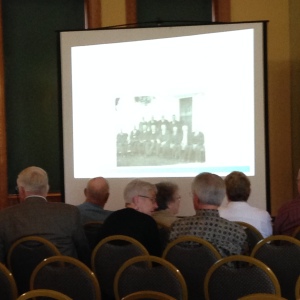 Last week, my husband and I attended a presentation hosted by the Minnehaha County Historical Society in Sioux Falls, South Dakota. The program was held at the Old Courthouse Museum, and discussed “Civil War Veterans of Minnehaha County.” All of these veterans fought for the Union, and most were from the Midwest. Twenty veterans were highlighted, and most were founding fathers of Sioux Falls.

Bill Hoskins, director of the Siouxland Heritage Museums and a member of the 13th U.S. Infantry Regiment, Company D, was the speaker. According to Mr. Hoskins, there are 347 documented veterans of the Civil War who are buried in 18 cemeteries in the county. Five percent were held as prisoners of war in Andersonville, Georgia, Camp Floyd, Texas, and Libby Prison in Richmond, Virginia. There are only 55 Confederate soldiers who are buried in the Dakotas.

Over the course of the war, the Union army grew from 10,000 soldiers to over one million. Some were mustered out in the summer of 1866 in my hometown of Sioux City, Iowa. After the war, many veterans participated in westward expansion through the Homestead Act. According to Mr. Hoskins, ex-Confederates were not allowed to participate. Many Confederates who were held captive at Rock Island Prison Camp in Illinois stayed in the Dakotas to fight Indians after they took the oath.

Fort Dakota was built on the banks of the Big Sioux River in June, 1865, where Sioux Falls is now. Two hundred and twenty-one men were members of the G.A.R. in Minnehaha County, and seventy percent were farmers. Some had various professions at the same time, such as doctors and fire chiefs. They promoted veterans’ affairs, and many were members of the Mason’s. These men helped shape South Dakota into what it is today.