Archive for the tag “Little Sorrel”

An Excerpt From Horses in Gray

Here is another excerpt from my nonfiction book, Horses in Gray: Famous Confederate Warhorses. This one describes the origins of General Thomas “Stonewall” Jackson’s horse, Little Sorrel. I hope you enjoy it! 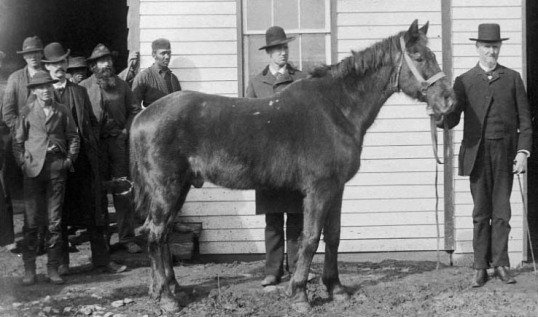 No one knows the exact origins of a small chestnut horse that came to be known as “Old Sorrel,” or “Little Sorrel.” His story, both tragic and triumphant, made him one of the most famous and beloved horses in history.

On May 1, 1861, Colonel Thomas J. Jackson was deployed to Harpers Ferry, Virginia nine days after the Federals had set fire to the arsenal and armory.1 He was ordered to secure those buildings and command troops from the Valley District who were stationed there. His top priority was training and outfitting his troops with equipments, which meant procuring horses for the army. Fortunately for Jackson, a few days after his arrival, an eastbound train on the Baltimore & Ohio line was seized containing five carloads of cattle and horses. Upon inspection, Jackson chose two horses based on the advice of his quartermaster, Major John Harmon. One horse was a large, muscular stallion, which Jackson named “Big Sorrel.” The other was a small Morgan gelding thought to be eleven years old, gingerbread in color, with no white markings. Jackson named him“Fancy,” and intended to give him to his wife. He then paid the quartermaster for an estimated worth of the animals.

It didn’t take long before Jackson discovered that Big Sorrel was too much horse for him. He was not a good horseman, and the stallion was flighty and gun-shy, so Jackson decided to keep the Morgan for his own instead, and re-named him “Little Sorrel.” Although the scruffy gelding was only fifteen hands high, Jackson took to him because of his pleasant personality and easy gait. Certainly the horse was no beauty, but

1.The Washington Times, “Bones of Warhorse Will Be Interred Near Jackson” by Martha M. Boltz, July 19, 1997

perhaps Jackson sensed in him some of the qualities that he demanded of his soldiers and of himself; courage, a willingness to obey orders under any circumstances, and extreme endurance.2

According to Jackson’s wife, Mary Anna Morrison, “… he was well formed, compactly built, round and fat (never “raw-boned, gaunt, and grim,” as he has often been described), and his powers of endurance were perfectly wonderful. Indeed, he seemed absolutely indefatigable. His eyes were his chief beauty, being most intelligent and expressive, and as soft as a gazelle’s.”

Little Sorrel amused his master by lying on the ground like a dog when he slept. He would also supposedly roll over and lie on his back with his feet up in the air. Jackson treated his horse like a pet, and constantly gave him apples for treats.

Little Sorrel’s appearance seemed to match that of his master’s. One of his soldiers, volunteer William Andrews, wrote that Jackson was “a very ordinary looking man of medium size, his uniform badly soiled as though it had seen hard service. He wore a cap pulled down nearly to his nose and was riding a rawboned horse that did not look much like a charger, unless it would be on hay or clover. He certainly made a poor figure on horseback, with his stirrup leather six inches too short, putting his knees nearly level with his horse’s back, and his heels turned out with his toes sticking behind his horse’s fore-shoulder.3

Jackson also had a tendency to slouch over in the saddle when he rode. Even though he was considered eccentric because of his odd habits, such as raising his arm above his head to improve circulation and sucking on lemons, his men adored him because he didn’t put on airs. He ate what they ate, suffered along with them, and prayed openly.

Mascots and the War Between the States

We all know the important roles horses and mules played during the Civil War. They were essential to the mobility of armies. They pulled artillery caissons, carried officers, served as couriers, and of course, transported the cavalry. But besides equines, many other animals served in the War Between the States as well.

Soldiers were attached to their pets, and some brought along dogs, cats, and various domesticated livestock to the battlefront. They adopted squirrels, bears, birds, raccoons, and other wildlife as company mascots. Some unusual mascots included a badger, a camel known as “Old Douglas,” which was part of the 43rd Mississippi, and a bald eagle named “Old Abe,” which represented the 8th Regiment Wisconsin Volunteers. General Lee kept a hen that dutifully laid an egg for him every morning.

Many of these special animals are immortalized in statuesque form, including General Lee’s horse, Traveller, General Grant’s Cincinnati, and General Stonewall Jackson’s Little Sorrel. Dogs are honored, too, including Sallie, mascot of the 11th Pennsylvania. Her likeness is carved in bronze on the regimental monument at Gettysburg. There are many other famous canines that accompanied their masters to the battlefield … and to their death. A few are even buried there. These include Jack with the 102nd Pennsylvania Infantry, Old Harvey with the 104th Ohio, and Major with the 19th Maine.