Archive for the tag “General Stuart”

This is moving week for my husband and me. It has been crazy so far, but luckily, we haven’t broken anything (yet). We have managed to lose a few things, but hopefully, they will turn up. In the past four years, we have moved nine times, and we’re not even in the military! It has been a crazy ride but we have met a lot of wonderful friends along the way.

Moving is never an easy task, but it had to be much harder for Southerners who lived during the Civil War and were forced to evacuate before the invading army came along to steal their belongings and do unspeakable things to civilians. Marauding Union soldiers burned and took everything, leaving only what they thought was inedible and/or unsalvagable.

It was also very difficult to be in the military and be told to move in a moment’s notice. My novel, A Beckoning Hellfire, is soon to be re-published, so stay tuned for a new book cover and some updated edits. In the meantime, here is an excerpt from the book, describing how the Confederate cavalry had to move quickly and without much notice. 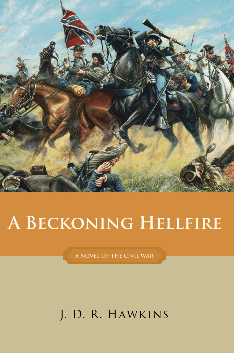 On Tuesday, June 16, General Stuart departed with the brigades of Beverly Robertson and Rooney Lee, now under the command of General John Chambliss. Before he left, the general issued a congratulatory order to his remaining troopers, which was read to the men during roll call.

“With an abiding faith in the God of battles, and a firm reliance on the saber, your successes will continue. Let the example and heroism of our lamented fallen comrades prompt us to renewed vigilance and inspire us with devotion to duty.”

The cavalrymen were informed that they was to serve as a counter-reconnaissance screen, thereby preventing Pleasanton’s Union cavalry from discovering General Lee’s objective, which was to cross over into Pennsylvania. Within a few days, General Hampton’s brigade, after being told to prepare three days rations, broke camp and departed north.

The day was extremely hot and humid, but the men did their best to distract themselves from their discomfort. While they rode, the Georgians sang at the top of their lungs.

“Sittin’ by the roadside on a summer day,

Chattin’ with my messmates, passin’ time away,

Lyin’ in the shadows underneath the trees,

“I wish this war was over, when, free from rags and fleas,

We’d kiss our wives and sweethearts and gobble goober peas.

The Georgians sang with such exaggerated conviction that David couldn’t help but chuckle. Once he’d learned the lyrics, he happily joined in, and boisterously sang along, too.

Later on in the day, the horsemen learned that General Stuart and his brigades had engaged in a battle near the small towns ofAldie and Middleburg. Heros Von Borcke, Stuart’s Prussian aide-de-camp, had been seriously wounded, and was expected to be incapacitated for quite some time. Upon hearing the news, David became greatly disappointed, since he had been looking forward to the day when he could race the colonel. Now he wondered if the opportunity would ever present itself.

The troopers continued their quest. Encountering a pontoon bridge that the Confederate cavalry ahead of them had constructed, David and his comrades crossed the Chickahominy River. That evening, a skirmish broke out between Hampton’s brigade and a Union regiment, but fighting ended when a rainstorm rolled in, covering the countryside with complete darkness as it burst open in a thunderous downpour. The Rebels were driven into the woods, where they were forced to spend the night wet, cold, and miserable.

Rain fell incessantly throughout the night and into the morning, drenching the men to the core. It was replaced by sweltering heat and humidity that afternoon. As night fell, a hailstorm erupted, pummeling the horsemen with stones the size of hens’ eggs. Unable to set their tents up in time, some of the men pulled heavy overcoats over their heads, which provided their only shelter. With only prepared rations to eat, they shivered in the chilly rain while they waited for morning to finally arrive. When it did, the overcast sky constantly released drizzle. The cavaliers mounted up and continued their march, reaching General Stuart’s brigades later that afternoon. No fighting had taken place this Saturday, May 20, due to the inclement weather, so they rested and cared for their horses, seeking cover in the woods behind a stone parapet. The cavalry was now over five thousand strong. Officers instructed the troopers not to release any information about their mission if they were captured.

In Honor of Two Great Americans

This weekend and next week mark the birthdays of two renowned American heroes: General Robert E. Lee and General Thomas “Stonewall” Jackson. Although the Confederacy for which they fought and/or died for ceased to exist, and was overcome by a unified government over states’ rights, these men served the military with bravery, distinction and nobility. This week I will honor General Lee, whose birthday is on January 19. An article of this remarkable man follows:

By Walter B. Barker.

The life and character of so noble a man as General Robert E. Lee is a theme that none but our greatest minds should discuss in public or in private, but with your permission the writer, who held an humble position on the staff of Brigadier General Jos. R. Davis, of Mississippi, (nephew of Jefferson Davis), in the Army of Northern Virginia, will relate two little incidents which happened at the “Battle of the Wilderness.”:

On the eve of the 5th of May General Lee, with General Stuart, rode to the front, where Stuart’s cavalry had encountered the advance of the Federal army. As they rode through the infantry, then awaiting orders, passing a farm house, three young ladies stood at the gate of the residence, holding a package, which from his gallantry, or good looks, or both, they entrusted to Capt. E.P. Thompson (nephew of Jake Thompson, and now a Mississippi editor), of General Davis’s staff, with the request that he deliver the same to General Lee. It contained three handsomely embroidered colored merino overshirts, very much worn in the army. Capt. Thompson at once rode forward to overtake the General, who had by this time reached within range of the shots from Grant’s skirmishers, and while under fire tendered the gift as from the ladies. General Lee, with his usual self possession and courteous bearing, said to Capt. T.: “Return my warmest thanks to the ladies, and be kind enough to deliver the package to one of my couriers: say that I trust I may see and thank them in person.

Early on the morning of the 6th, Grant, who had massed a heavy force in the immediate front of Davis’s Mississippi brigade, opened fire and began a forward movement on our lines at this point. Seeing we were unable to check their advance, Colonel Stone (since Governor of Mississippi), commanding Davis’s brigade, sent word to General Heth, division commander, that he must be reinforced, which brought to our aid a division of Longstreet’s corps, led in person by that able Lieutenant General. It was at this critical crisis that General Lee appeared upon the scene. After the enemy had been repulsed on the right, and while our chieftain was awaiting, in painful anxiety, information from our left wing, a courier — a mere youth — came dashing up with a message from Lieutenant General R.H. Anderson, his small pony panting like a deer that had been pursued by a pack of trained hounds. Delivering his sealed message to General Lee in person, who, after reading it, noticing how tired his pony was, said to him: “Young man, you should have some feeling for your horse; dismount and rest him!” at the same time taking from the small saddlebags attached to his own saddle a buttered biscuit, giving half of it, from his own hand, to the young courier’s pony. This act of consideration for the dumb beast made a lasting impression upon my then youthful mind, and taught me ever since to treat all animals as if they had feelings as ourselves. At the moment it occurred to me, hungry as I was, that he had better have divided his biscuit with the rider of the animals, or myself; but I soon appreciated the motive of his hospitality to the poor beast, and, as before stated, learned a lesson in kindness to animals I shall not soon forget.

Besides Jefferson Davis’ birthday on the 3rd, another noteworthy occasion happened 148 years ago. On June 5, 1863, General J.E.B. Stuart held a Grand Review of his cavalry troops in Virginia. Always the flamboyant cavalier, General Stuart transported ladies from Richmond via the Orange and Alexandria railroad. The review, complete with fancy maneuvers by the troopers, a floral-strewn grandstand, and trumpeters, also featured artillery that blasted at the horse soldiers with mock ammo.That evening, a ball was held, and General Stuart’s own musicians entertained while the ladies danced with Confederate cavalry officers.

Two days later, another review was held for General Robert E. Lee. It is believed that the Union cavalry, which was close by, saw dust rising over the ridge, kicked up by horses during the review, which gave away their location. The Yankees poised for attack. (For more information, please read my book, A Beckoning Hellfire, which describes these events in detail.)

On June 6, 1862, Memphis surrendered to Union forces. This marked a significant victory for Union troops in that they were able to seize partial control of the Mississippi River, a major waterway used for transport during that time. A year later, Vicksburg would also fall, enabling the Union to contain the entire length of the river. And on June 8, 1861, Tennessee formally seceded from the Union.