Archive for the tag “Bloody Lane” 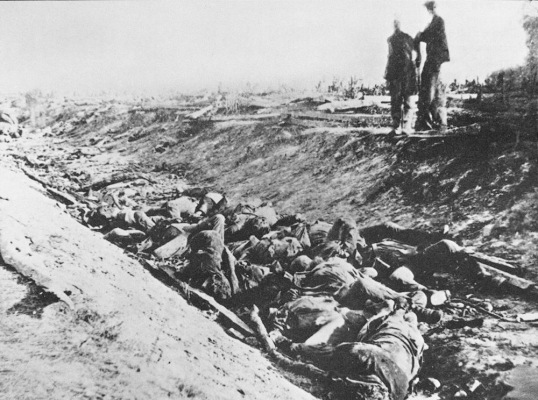 The bloodiest day in American history began on September 17, 1862 at Antietam Creek, near Sharpsburg, Maryland. Union and Confederate troops clashed with a series of attacks and counterattacks. Toward the center of the battlefield, Union assaults against the Sunken Road pierced through the Confederate line. Later, the third and final assault came from the Union army as they pushed over a bullet-strewn stone bridge spanning Antietam Creek. Just as the Confederates began to collapse, reinforcements arrived and drove the Federals back across the bridge, which later became known as Burnside Bridge. The battle ended in a draw, but President Abraham Lincoln decided it was enough of a “victory” to support his Emancipation Proclamation. More than 23,000 men were killed, wounded, or MIA. The road near Antietam Creek came to be known as Bloody Lane, and the creek flowed red with blood.

Not surprisingly, the Antietam battlefield is reportedly one of the most haunted places in the country. Visitors have heard gunfire and smelled gunpowder near the Bloody Lane when it was completely deserted, and many have seen ghostly apparitions in that area. Confederate soldiers approached them on the lane only to disappear into thin air. Burnside’s Bridge and St. Paul Episcopal Church, which was used as a Confederate hospital following the battle, are also haunted. According to local legend, the floorboards of the church are so bloodstained that not even sandpaper can take the stains out.

The sound of singing can sometimes be heard echoing across the eerily quiet battlefield. The tune sounds like “Deck the Halls.” During the battle, some Irish-American Confederates used a Gaelic hymn as their battle cry. The hymn sounded very similar to the Christmas melody.