Archive for the tag “artifacts”

It always fascinates me how people can manage to find amazing relics. When we visited Brandy Station and the Graffiti House several years ago, some of the locals told me about how they had almost demolished the old building, but then found invaluable drawings done by both Confederate and Union soldiers. The artwork had been hidden under wallpaper. Fortunately, it was discovered and the house was restored. It is now a museum. While they were restoring it, someone looked in the chimney and found an old bayonet. Amazing! Some of the locals told me how a neighbor had found so many horseshoes that he used them as a foundation for his driveway. What I wouldn’t do to have just one of those old horseshoes!

When we lived in Mississippi, several friends told me about how they would go out to where they knew armies had camped. They took their metal detectors and found all sorts of interesting things: from belt buckles to buttons to bullets and then some. One friend told us of how he had been plowing in his field and unearthed a sword in its scabbard. The scabbard was rusted, but the sword was just like brand new. What a find!

I have always wanted to add a cavalry sword to my collection, so I splurged and bought one off of Ebay. It is Confederate and doesn’t have any markings. These swords were called “wrist breakers” because they are so heavy and hard to wield. I don’t know much else about the sword and probably never will, since the seller didn’t know much either, except that it is an M1840 that he purchased at an antique arms show about 5-6 years ago in Virginia. Nevertheless, it’s pretty cool, and I have it displayed on the wall above my work station.

Several years ago, I also aquired this framed specimen at a United Daughters of the Confederacy convention in Richmond. The collection includes camp chest hardware, an R.R. seal, a button back, a shoe buckle, and miscellaneous brass. These items were supposedly excavated from central Virginia from Civil War camps and battlefields. The description is a bit vague, but still interesting.

I would love for you to share any treasures you have discovered. It is always enthralling to discover these artifacts and bring history to life. I’d also like to know how you found your treasures, so please, share away! 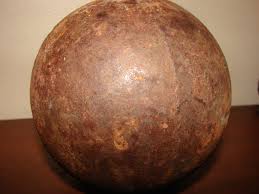 Researchers are trying to figure out the best way to get War for Southern Independence munitions out of the Congaree River in South Carolina. Historians have used sonar and metal detection to get an idea of where cannonballs, cartridges and knapsacks were dumped near the Gervais Street bridge in downtown Columbia.

On their way out of town, Union troops led by General William T. Sherman (“Willy T” for short) unloaded supplies into the river. In 1954, a gas-producing plant closed near the Congaree River in Columbia, South Carolina. But its presence lingers in the form of roughly 40,000 tons of “taffy-like” black tar that needs to be removed from the river. A most unusual side effect of damming the river to do so: the possible recovery of Confederate munitions seized and then dumped by Sherman’s Yankee army a century and a half ago.

A list of what Union troops logged as having captured from their Confederate counterparts in the seizure of the city on Feb. 17, 1865: 1.2 million ball cartridges, 100,000 percussion caps, 4,000 bayonet scabbards, 3,100 sabers, 1,100 knapsacks, and more. Whatever they didn’t bring with them as they marched toward North Carolina; they dumped in the Congaree River to keep it out of Confederate hands. The munitions lie beneath a layer of tar that oozed from the long-closed gas-making plant located near what is now the Governor’s Mansion. Consultants hired by the SCANA Corp. as part of the utility’s river cleanup found evidence of the artifacts. The energy company, SCANA Corp, will facilitate the Congaree cleanup, which involves exposing about 15 acres of riverbed and removing a tar cap that’s, on average, 2 feet thick—along with any Civil War artifacts, which would note would belong to the state of South Carolina.

While the company’s Director of Environmental Services says “we don’t have any direct knowledge of ordnance,” he also didn’t deny the findings of a September draft report SCANA commissioned that involved the use of sonar and metal detectors. That report identified 218 sites as “exhibiting signature characteristics that could be associated with ordnance.”

Though items have been documented as being salvaged in the 1930s, 1970s, and 1980s, the state’s underwater archaeologist, James Spirek, isn’t expecting a mass cache to surface this time around. “I’m sure there will be some interesting items. I don’t anticipate huge volumes,” he says. He also said the ordnance likely will be housed at the Confederate Relic Room in downtown Columbia.