Archive for the category “seance”

What Is Up With That?

I find this downright creepy. Like throwing paint and spray painting “Black Lives Matter” all over our American veterans’ monuments and memorials isn’t bad enough, now some crazy was caught trying to blow one up. How insane is that? Let me know what y’all think of this article.

FINALLY SENTENCED
Remember Andrew Schneck? Last year he had been charged with attempting to maliciously damage property receiving federal financial assistance. He plead guilty in March.
Now, Schneck’s sentencing comes one year after a Houston park ranger spotted him kneeling in the bushes near the Dowling statue on Aug. 19, 2017.
According to a criminal complaint, the ranger saw Schneck holding two small boxes containing “what appeared to be duct tape and wires.” While Schneck was placing the boxes on the ground, the complaint said, he “took a clear plastic bottle appearing to be full of a clear liquid from one of the boxes” and then “proceeded to drink from the bottle, then immediately spit the liquid on the ground next him.” Schneck then poured the contents of the bottle on the ground next to him.
An analysis of the liquid later revealed it was “most likely nitroglycerin,” which is “one of the world’s most powerful explosives” when undiluted, the complaint read.
The ranger also noticed a timer and wires near Schneck, the complaint said.
“When asked … if he wanted to harm the statue, Schneck responded that he did, and that he (Schneck) did not ‘like that guy,'” the complaint said.
In addition to the suspected nitroglycerin, authorities also found a white powder that was “most likely HMTD,” or hexamethylene triperoxide diamine. “HMTD is used as an initiating, or primary explosive,” the complaint said. 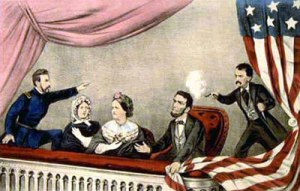 150 years ago, President Abraham Lincoln became the first U.S. president to be assassinated. On the evening of April 12, 1865, Lincoln attended a play at Ford’s Theater titled Our American Cousin with his wife, Mary Todd, Union army officer Henry Rathbone, and Rathbone’s fiance, Clara Harris, the daughter of New York Senator Ira Harris. While they enjoyed the play from the presidential box, actor and Southern sympathizer, John Wilkes Booth, sneaked into the box and shot Lincoln in the back of the head. The president was taken across the street to William Petersen’s Boarding House, where he lay dying for several hours. He expired at 7:22 a.m.on April 13.

Booth escaped Washington with accomplice David Herold. The two men traveled through southern Maryland until they were cornered in a barn in Virginia on April 26. Herold surrendered, but Booth refused and was shot to death. Conspirators of the assassination were arrested, including Mary Surratt, who owned the boarding house where Booth frequented. She later became the first woman in American history to be hung by the Federal government for treason.

The traumatic event left an incredible impact. Mary Todd, who claimed to communicate with her dead husband through seances, was eventually committed to an insane asylum by her oldest son. Henry Rathbone married Clara Harris, and later, murdered her. Rumors abounded for years that John Wilkes Booth had actually escaped and had gone West or to Mexico. The train Lincoln’s body was transported on from Washington to Illinois was seen for many years as a spectral ghost. And the spirit of Mary Surratt haunted the Old Capitol Prison where she was hung until the building was razed in 1929.