Release Blitz – Once Upon a Kiss 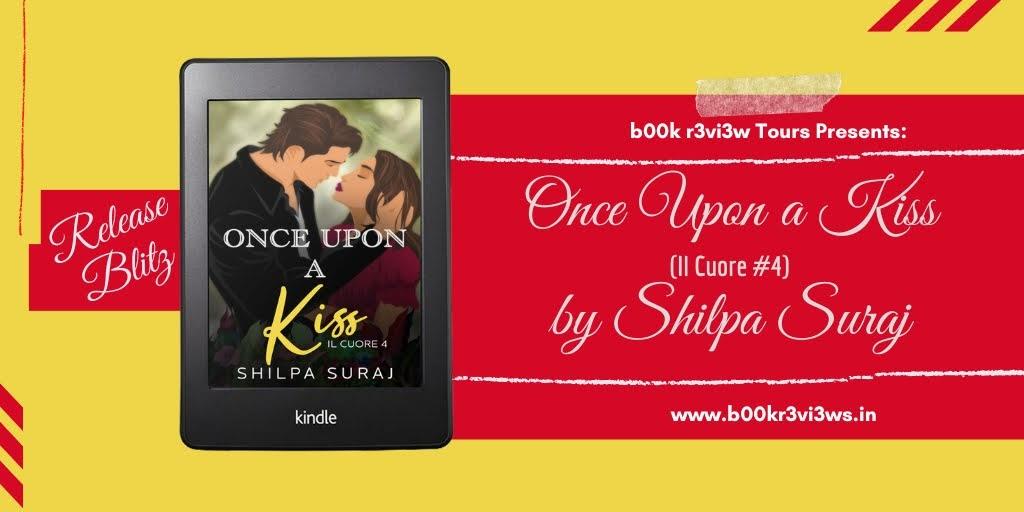 “Kissing you means I’m beyond redemption.”

Orphaned at a young age, scraping together a life below the poverty line, Karam Bakshi has only ever wanted one thing. Success. With unrelenting focus and backbreaking effort, he has carved out the life of his dreams. And then he saw her and forgot that he had goals or a plan or even something as basic as ideas.

Shikha Sachdev, only daughter to a mining magnate and jilted fiancée to one of the most powerful men in the country, has never wanted for anything. And then she met him and realised that until that moment, she never had wanted anything. Not like she wanted him.

When passion collides with reason, when the heart goes to war with the brain, and old scabs rip open under the onslaught of new wounds, there is nowhere to hide, nowhere to run, and only one option left; gamble with everything you’ve got. Win and reach for a lifetime of happiness or lose and you lose everything, including your very sense of self.

Can Karam and Shikha ever find common ground? Or are they destined to orbit each other like the most tortured star-crossed lovers of eternity?

Read an Excerpt from Once Upon a Kiss

Karam stiffened at the sweet voice and the even sweeter sentiment it oozed. He didn’t do sweet. He turned slowly to face her.

Anger flared on those perfect features, but she composed herself a second later. You had to admire that level of control. She would have made the perfect politician’s wife. Kanak, on the other hand…a reluctant laugh huffed out of him.

“Why are you like this?” she asked now, her tone bored but her eyes alive with something he recognised all too well. The same emotion thrummed through his veins, heating his blood and kickstarting his heart.

He took a sip from his flask, a deliberately long one. He wanted to smack his lips, the gesture as pointed as it was obscene, when she stepped closer to him.

“You didn’t reply to my last message.” The soft words only stoked the heat.

“Didn’t have time.” The words were a low snarl in response.

She cocked her head, those pretty hazel eyes seeing right through him and to the lonely, angry, always hungry boy he’d been and apparently, never outgrown. The boy who’d longed for a better life, for a full stomach, for a night without being whipped or beaten, for an affectionate touch, for someone, anyone really, to love him.

A boy who’d thought he’d deserved better. A boy who’d wanted something pretty, something special in his life. A boy who’d dirtied and ruined everything he’d held in his hands. Including this woman.

He’d kissed her. And she’d lost everything. Her rich, powerful fiancé had ended their engagement, her family had shunned her, humiliated by her actions and her business had lost investors. Apparently, they’d been backing the woman who was going to marry Aakash Thakkar. Not someone who’d kiss an alley rat like him.

“Go inside,” he told her softly.

But when did she ever listen to him?

“No,” she said, equally softly, stepping forward and into his space.

“You really need to find a rich, pretty boy to practice this shit with, Princess.” The words were hoarse, his chest starting to heave.

“But I don’t want to,” she murmured, her fingers pushing the hair back from his forehead, running through the strands. She gripped the back of his neck, the contact feeling like a brand on his skin.

“What do you want?” His hand fisted around his flask even as the other one gripped her hip, the skin soft and satiny under his callused palm. Her saree pallu whispered down one shoulder and slipped to the ground but neither of them noticed, their eyes only on each other.

“What. Do. You. Want?” The words were dragged from him.

This time when she kissed him, he didn’t just go up in flames. He swore he’d burn the world down for a chance to do this again. And again.

A published author with Harlequin India – Mills & Boon India Collection and Juggernaut, Shilpa Suraj’s books have hit both the Hot New Releases and Bestseller lists on Amazon. Her next novel, tentatively titled ‘Wrong,’ has been contracted by Rupa Publications and will release later this year. She is also part of the Flipped Anthology by Harper Collins and had an audiobook book Insta Reddy release with Storytel.

She is, amongst other things, currently working on ‘Frazzled and Fabulous,’ a humorous, true-to-life parenting story that is part memoir and part nonfiction.

An avid reader with a passion for creative writing and storytelling saw her participating in writing competitions at school and dabbling in copy writing for an ad agency as a teenager. Twenty years in the corporate space, including a stint in Corporate Communications for Google, India, and a spell at entrepreneurship all hold her in good stead for her multiple current roles of author, mother and Head of Human Resources & Public Relations at an architecture and interior design firm.