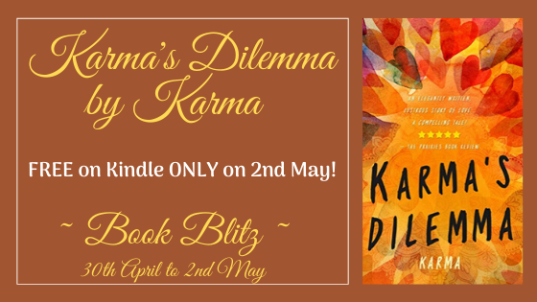 Karma, a young man, knows very well who his soulmate is. Or so he thinks.

But, really, who is the one?

The posh Angela who he worships. Or is it Sana, the wild racer, who drives him crazy. Or is it Simi, the sensible psychologist, who puts him back together.

Or maybe there is no one for him because Karma’s deeds in his all-consuming quest as he scours the world have broken so many rules that, one day, karma, the immortal and unrelenting collector of soul-debt, comes calling for Karma, the mortal, himself.

Will Karma the mortal outwit karma the immortal? Or will karma wipe Karma away…

Read some Snippets from Karma’s Dilemma

Every once in a while, Grandfather would muster enough strength to pick up his stick and take a walk to the orchard, along with me, whenever he needed a fix; Lalita’s husband was his supplier.

Grandfather would pay for the joint of marijuana, once Lalita’s husband had prepared it for him. After that, we would sit under the shade of a mango tree, while Grandfather took lazy puffs from his joint, a big toothless grin spreading across his face and making him look like a laughing Buddha, except Grandfather was thinner. Once the Marijuana had taken full effect, he would close his eyes, lean against the tree trunk and talk about the good old days; the days of his youth and strength, when he had led our townsfolk in the freedom struggle. He talked proudly of the time spent in the local prison along with fellow patriots. He often mentioned a letter which Mahatma Gandhi himself had written, personally thanking Grandfather for his efforts, though no one else in the family had ever seen that letter.

The only other freedom fighter I knew of was a young toffee seller, a dark-skinned and handsome man, Veerasamy. Tied to an upright stick, attached to his bicycle, was a toffee doll, dressed in an old pink frock. He would pull some toffee from the doll, fashion it into a watch, a ring or a bird and sell to children in town. While moulding our toffees into the shape we desired, Veerasamy talked about equality; for the poor, for women and the children. What we needed was evolution and not revolution he would say. In his free time, he did solo acting plays at the town centre, being for a while the oppressor and for a while the oppressed. A police constable had whacked him with the cane once for being a nuisance in public, which was when the toffee man’s performance had held up traffic.

Something else happened during this time to increase my determination further; I fell in love for the first time in my life. I fell in love with Angela Matthew. I first saw her a few months into my second year at college. The first time she walked into the class, I stopped breathing. When I did breathe again, it was only to inhale her scent, a scent of roses, as she walked past. It was as if the queen bee herself walked into the hive the classroom was. Her family had moved from Muscat in the Middle-East when her father had decided to return for good to India to set up his own business of supplying spare parts for the car industry. As Angela introduced herself to the class, I wanted to walk up to her, hold my fingers to her lips and feel the sweet music flowing out of her mouth. When she smiled, the delightful dimples on her cheeks captivated my attention, like the rotating concentric circles used by a hypnotist do. 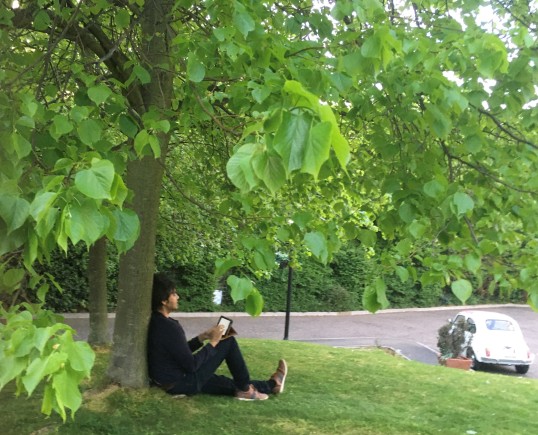 Before I tell you more about myself, I want to answer a question that might arise in your mind. Given there are already so many writers (some might think too many), the question is: Why should I write at all?

Simply, I write because I was not allowed to write. Or read, any book which had the word love in it. In my family, it was believed that reading about love lead to rebellion. I myself picked up the pen when my only child was six-months old. At that time, I was without a job. I wrote because there was a lot that I wanted to tell my child, even if one day in the future, to make sense of this world. Writing also helped me keep hope alive, one page at a time, as I went from one fruitless interview to another.

As my child took first steps, I reached a milestone of my own. I completed my first book; the story of a young man’s quest to find answers to life’s questions. A boutique publisher in Paris loved it and translated my work into French. I even found a job soon after.

I am choosing to write under a pen-name because I am at a stage in my life where I prefer and love anonymity. Once my child is older, I intend to write under my own name.

Many thanks for reading my post and I hope you enjoy reading my novels.