A Man With a Big Heart

I would like to wish you a very Merry Christmas! The following is a story about a remarkable man. During this holiday season, let’s all make an effort to show others love and compassion, just as he did. 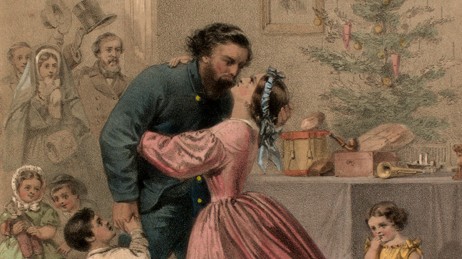 By Calvin E. Johnson, Jr., freelance writer, author of the book When America Stood for God, Family and Country, and member of the Sons of Confederate Veterans (cjohnson1861@bellsouth.net)

This is a True Christmas Story

Christmas is a wonderful time to celebrate with family, friends and supper at Grandma’s house. Grandpa will gather the children around the fireplace and tell them the story of Jesus Christ who was born on Christmas Day while Grandma makes gingerbread cookies and Daddy brings the Christmas tree in the family room for decorating. Mamma as always will lead us in the singing of ‘Silent Night—Holy Night’ as the Star of Bethlehem is placed on top of the tree.

During the year 1919, one year after the end of World War I, the people of Atlanta, Georgia were celebrating the Christmas Season. Many people attended Church or Synagogue and gave thanks to God for his many blessings. Folks, while shopping, were uplifted by sweet sounds of Christmas music played by the Salvation Army Band. There was a friendly and charitable atmosphere during this time of the year.

There were, however, some who were not as fortunate!

The aging veterans, in the Confederate Soldier’s Home, were proud men who had braved many a battle in the 1860s. One of these men was former Captain Thomas Yopp who saw such battles as that of Fredericksburg where a cannon shell burst knocked him unconscious.

The man who stayed with him until he recovered was his servant who had also joined the 14th Georgia Regiment, Company H. Bill Yopp was more than a servant; he and Thomas Yopp were friends who hunted and fished together.

Bill Yopp, a Black Confederate, was sympathetic to the men of Atlanta’s soldiers’ home who had been his compatriots in arms over fifty years earlier.

During the War Between the States, 1861-1865, Bill Yopp was nicknamed “Ten Cent Bill” because of the money he made shining shoes. He did this for the soldiers at a dime a shine and ended up with more money than most of his comrades. These men, also, cared for him when he was sick.

During the Christmas of 1919, Bill wanted to pay back the kindness that was shown to him. He caught a train from Atlanta to Macon, where he was offered help from the editor of a local newspaper [The Macon Telegraph]. He then caught a train to Savannah to raise Christmas money for the old veterans. Bill met many generous people on his trip.

Just weeks before the Christmas of 1919, he had raised the money and Georgia’s Governor Hugh Dorsey helped him distribute envelopes of three dollars to each veteran. That was a lot of money in those days.

The old Confederates were speechless. Tears were shed because of Bill Yopp’s good heart and kind deed. Many of these men had little or nothing. Bill was invited to come into the home’s Chapel and say a few words.

Bill Yopp was later presented a medal of appreciation for his support of the old soldiers and also voted in as a resident of the Confederate Soldier’s Home.

Bill died on June 3, 1936, the 128th birthday of Confederate President Jefferson Davis. He was buried at Marietta, Georgia’s Confederate Cemetery with his compatriots.

Christmas is about love, forgiveness, old friends, family and the Child who became a savior.

The source of information for this story came from the book, entitled: Bill Yopp “Ten Cent Bill” Narrative of a Slave! This book was written in 1969 by Charles W. Hampton.

After the war, now a free man, he returned to the Yopp plantation in Georgia and worked there until 1870. He then secured a job as bell boy at the Brown House in Macon. From there he went to New York, California, Europe, and then worked as a porter on the private car of the President of the Delaware and Hudson Railway.

as well. At Christmas, with the help of the Macon Telegraph, he raised enough money to give each resident in the home $3.

In 1920, Bill wrote a book entitled “Bill Yopp, ‘Ten-Cent’ Bill.” The book was about his exploits before, during, and after the war. The book sold for 15 cents a copy, or $1.50 for a dozen. Proceeds were shared by Bill and the Confederate Soldier’s Home.

The Confederate veterans were so appreciative of Bill’s help that they took up a collection and awarded him a medal. The board of trustees voted to allow Bill to stay at the Home for as long as he lived. He was one of the last remaining veterans in the Home when it closed its doors in the 1940’s. Bill was also a member of the Atlanta U.C.V. Camp.

2 thoughts on “A Man With a Big Heart”