I’m really not sure what to make of this. Please share your views. Do you think this is okay, or is it an infringement on existing artwork? It is understandable how the artist is making a statement against a longstanding monument in Richmond, but is it really appropriate? 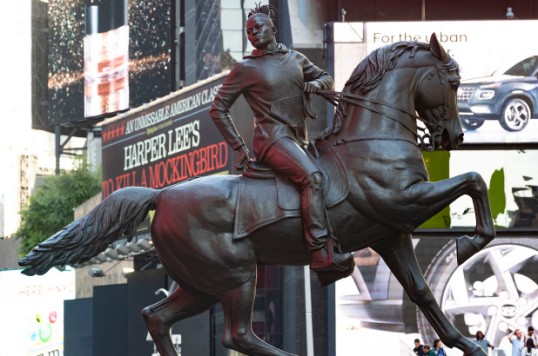 ONLY IN NEW YORK
Perpetually crowded Times Square has a new statue for pedestrians to navigate – but it’s unlike any other.
Artist Kehinde Wiley unveiled his biggest work ever … a massive bronze statue of a young African American man in urban streetwear sitting astride a galloping horse.
Called “Rumors of War,” it flips the script on traditional statutes commemorating white generals. Wiley described his bold work as a call to arms for inclusivity.
He told The Associated Press afterward that he hoped young people would see it and “see a sense of radical possibility – this, too, is America.”
The project was born when Wiley saw Confederate Gen. J.E.B. Stuart’s monument in Richmond, Virginia.