THE LAST BATTLE, WON BY WOMEN 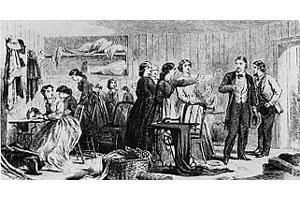 The following amusing incident was copied from a paper by the late Capt. John H. Martin, of Hawkinsville, Ga., in which he said: “The last guns of the Confederacy had been fired on the battle fields and the Confederate military organizations had disbanded, when the heartless despot in command of New Orleans issued an infamous order that prayers must be said in all the churches for Abraham Lincoln. Into St. Luke’s Episcopal Church, which had only ladies attending services, strode one of the satrap’s subaltern officers with an imperious step and strut, handed the order to the minister, and, in a pompous, insulting manner, turned and ordered prayers for Lincoln. Like a flash of lightning, impelled by the same heroic impulse, every woman in the house, spontaneously and instantly, without a word, assailed the officer with hat pins, parasols and everything at their command. The cowardly cur beat a hasty retreat and reported to his superior officer that if any further orders for prayers for Lincoln were to be served on the women of New Orleans, another must be found who was fool enough to undertake the serving, for he had enough and had thrown up the job. This might be aptly termed the last battle of the Confederacy, and while the last fought by the men was not a success, the last one fought by the noble, grand, brave women of New Orleans in defense of honor and all that was true and pure and patriotic was a conspicuous success.”