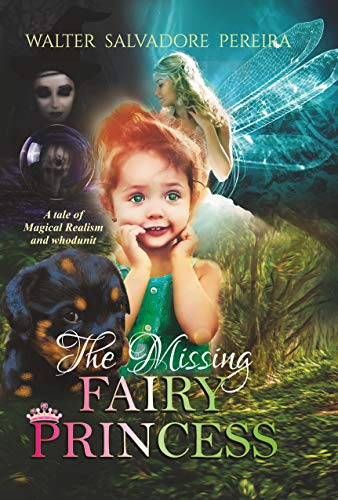 “The Missing Fairy Princess” is the story of a 16-year-old fairy princess pitted against a powerful witch. The witch has stolen a potent new mantra developed by a colleague, ruthlessly snuffing out a brilliantly innovative mind.  She then hatches an elaborate plot to frame an adversary for her misdeed. Her intention is to exact sweet revenge from her foe and at the same time, get away with the theft. The victim, caught in her vicious web, is doomed to disgrace and a life sentence on a harsh penal colony. Meanwhile, the witch learns from her crystal ball, about an imminent threat from a fairy princess wearing a pink tiara.  To ward off that threat she kidnaps the fairy princess, wipes her memory clean and then turns her into a two-year-old girl.

Unfortunately for the culprit, she has goofed up by kidnapping the wrong fairy princess, Merlyn, instead of Ashlyn, her twin.  The mistake turns out to be the undoing of the witch because Ashlyn proves to be her nemesis. The brilliant fairy princess exposes the cobweb of misleading evidence fabricated by the witch, ultimately unmasking her.

If you love mystery, whodunit, with a dash of magical realism and sci-fi, this book is for you.

About the Author:
After spending over 25 years in the Middle East, the author, aged 75, now leads a retired life.  He lives with his wife and son in Thane, near Mumbai. He has been passionate about writing from his early days.  His first book was a fast-paced sci-fi novel titled “This Nightmare is for Real”, was self-published. That was followed by a historical fiction titled “Bheem – The Sage of Madhavpur”, again a self-publication.  A third book, a fairy tale titled “The Missing Fairy Princess” which was published on Kindle Select during the first week of June 2019, while a fourth on the oft-discussed topic of cross-border terrorism titled “The Carnivore has a Heart” is slated for publication shortly thereafter again on Kindle Select.

Imagine this scenario:  You are one of the best in your profession, own a palatial mansion on Beverley Hills, a Bugatti or Lamborghini roaring to go in your garage and tons of dough in your Swiss bank account. Would you be content with your status and crave for nothing more?  Certainly not, because you are human and have a chink in your armor called G-r-e-e-d!

On a parallel note, Zharga is a senior witch, with knowledge of witchcraft second to none, a huge cave on the upper reaches of the Alps with a breathtaking view, a magnificent flying carpet to take her to any place she commands and a magic wand capable of fulfilling any wish of hers.  Does it leave anything more to be desired? Alas, she too is human and greed is one of our built-in flaws!

What triggers it:  The witch overhears a conversation between two colleagues about a potent new mantra developed by one of them.  She cannot resist the temptation to lay her hands on that mantra and in the process ruthlessly snuffs out a brilliant and innovative mind.  Her desire fulfilled, she sets about framing an adversary for the crime. Her agenda is two-fold – to exact revenge from her foe and at the same time, get away with the theft.  The victim caught up in her cobweb, faces disgrace and lifetime imprisonment on a harsh penal colony.

The plot:  Amidst her nefarious activities, the witch is warned by her crystal globe about an impending serious threat from a fairy princess wearing a pink tiara. She at once takes preemptive measures. She captures the fairy princess and destroys her mind.  As an added precautionary measure, she turns the fairy into a two-year-old girl intending to offer her as a sacrifice to her Demon God.

Good prevails over evil:  The witch hasn’t contended with fate.  As it turns out, because of a prank played by the twin of the intended victim, the witch ends up capturing the former – Merlyn instead Ashlyn, her twin.  It is a costly error, one that ultimately results in her undoing as Ashlyn proves to be her nemesis as predicted by the crystal globe. The brilliant fairy princess untangles strand-by-strand the intricate cobweb woven by the crafty witch and finally, unmasks her.