Excerpt from A Beckoning Hellfire

Today marks the 156th anniversary of the death of the great Thomas “Stonewall” Jackson. The general was hit by friendly fire at the Battle of Chancellorsville. His left arm was amputated and buried at the Ellwood House. Jackson was improving, but suddenly, his health took a turn for the worst. He contracted pneumonia and died on a Sunday, which he said he always wanted to do. His last words were, “Let us cross over the river and rest under the shade of the trees.”

Here is an excerpt from my novel, A Beckoning Hellfire, describing how his soldiers reacted when they heard the news. 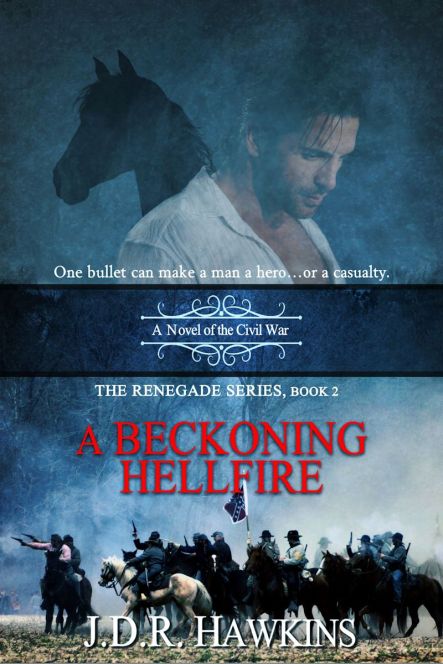 Suddenly, a loud cry went up behind him. He hurried to camp, where chaos was everywhere. The men looked distraught, their faces wrought with anguish. He found Alfred Crawford, one of the soldiers he wrote letters for, and asked him what had happened.

David stood dumbfounded for a moment. Returning to his campsite, he found John sitting under a tree, puffing on his pipe, and staring off. Michael was weeping. The death toll continued to climb, and there was no end in sight. Now the Confederacy’s beloved general, “Old Jack,” was dead, too.

In the morning, General Lee issued General Order #61, which Lieutenant Colonel Waring read to the men during roll.

“With deep regret, the commandin’ general announces the death of Lieutenant General T.J. Jackson,” Lieutenant Colonel Waring orated. “Let his officers and soldiers emulate his invincible determination to do everything in the defense of our loved country.”

One of the buglers, Charles W. Peters, played “Taps.” The men stood in solemn mourning with their heads bowed and their hats held in their hands.

Overwhelmed by the tragedy, David felt completely powerless and alone. His heart ached, and with each day, he grew more despondent and depressed. He didn’t have anyone to express his sorrow to except his horse, and Renegade could only communicate so much. One by one, he was losing everyone he loved. The romantic dream he had shared with Jake only a few weeks ago was now crumbling down around him, smothering him. It was like a smoldering fog surrounding them all and suffocating them. He longed for his family to write. The memory of their dear faces was the only thing that gave him hope. Painful, heartbreaking loss was all around, but somehow, it gave him more resolve. He knew he had to defend his homeland and family by repelling the Northern tyranny, at any expense.