I love this article! I am so sick and tired of hearing about historically ignorant people destroying monuments. This time, the joke’s on you!

Red paint was splattered on the statue’s base. The letters BLM, an apparent reference to the Black Lives Matter movement, was also sprayed on the base.

Virginia Capitol Police, which is responsible for policing the monuments, told news outlets the vandalism occurred late Friday or early Saturday between patrols.

Within just a few hours of discovering the desecration Saturday morning, cleaning crews arrived on the scene and began working to remove the red paint. By 1:00 pm, clean up was proceeding and our folks on the scene reported that the paint was coming off nicely. Capitol police reported to us that they had collected evidence and an investigation was underway.

This type of violent criminal activity by monument haters only proves to accentuate the real difference between us and them and helps bring more and more citizens to our side. Our folks, who remained on the scene, working with Capitol Police and the cleaning crew throughout the day, reported that most citizens who came by expressed disgust and anger at the vandalism.

By 3:30 pm, less than 10 hours after the vandalism was discovered, crews were putting the finishing touches on the clean up and the result was amazing.

The columns are now bright and shining like new! Almost makes us want to send a note of appreciation to the vandals. Because of them, the monument got a fresh cleaning and looks better than ever!

And on a similar note… 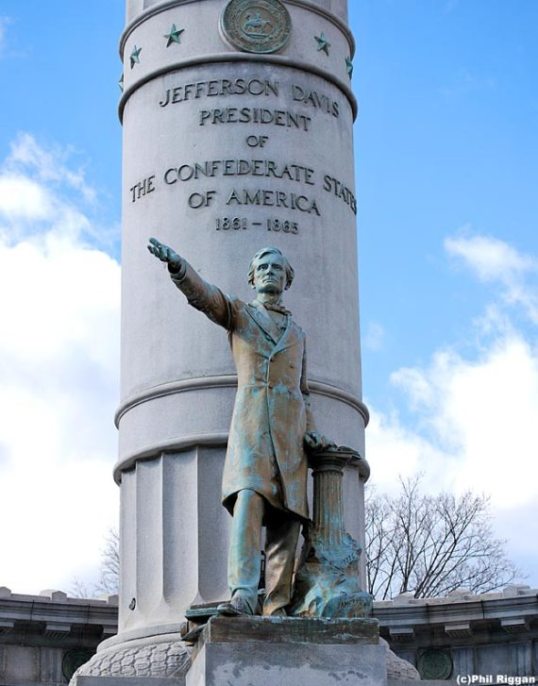 The first event is on August 19 from 12-4 p.m. at the Jefferson Davis Monument, following the Monument Avenue Commission’s recommendation that the monument be removed.

The second event is planned for September 15.

Monument supporters are encouraged folks to bring flags but flags on poles and signs on sticks are not allowed.