The Case of the License Plates 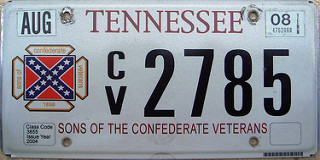 The number of Tennesseans now displaying Confederate Battle Flag license plates is higher than at any other point in the last decade, according to state data on specialty tags.
The Sons of Confederate Veterans plate, the proceeds from which benefit the organization’s Tennessee Division, has been issued by the state since 2004.
At the end of the 2018 fiscal year in June, the state reported that 3,273 Sons of Confederate Veterans license plates were active in Tennessee, a number 72 percent higher than at the end of the 2015 fiscal year when the display of Confederate Flags was thrust into national debate.
The number of Tennesseans displaying SCV tags steadily increased in 2016 and 2017, according to data provided by the State, before peaking in the last year.
In Tennessee specialty plates have a $61.50 annual fee. $35 is allocated to the plate’s respective beneficiary, the Tennessee Arts Commission and the Highway Fund. So the way it breaks down is that depending on whether the plate is new or being renewed, the SCV’s share is is between $15.85 and $17.50 per year per license plate. According to the Department of Revenue, the Sons of Confederate Veterans received approximately $57,700 from the plates in the 2018 fiscal year.
The State of Texas successfully ended their SCV specialty plate offering. Efforts to eliminate the plate in Tennessee have so far failed. But there is currently an effort to prevent the SCV from receiving the funds generated from the sale of these plates.

The SCV sued the city of Memphis in January after the Mayor Memphis sold public land to a nonprofit in order to take down the statues of General Nathan Bedford Forrest and President Jefferson Davis. Monies received from license plates may have been used to pay some of the legal fees. Senator Sara Kyles is in the process of drafting legislation that, if enacted by the General Assembly, would prevent funds distributed by the state through the license plates from being issued to an organization that sues the government. Effectively, the new guidelines would target the SCV and prevent them from receiving the revenue from the plates.
(Article courtesy of Dixie Heritage Newsletter, July 27, 2018 ed.)