The Slaves of General Forrest 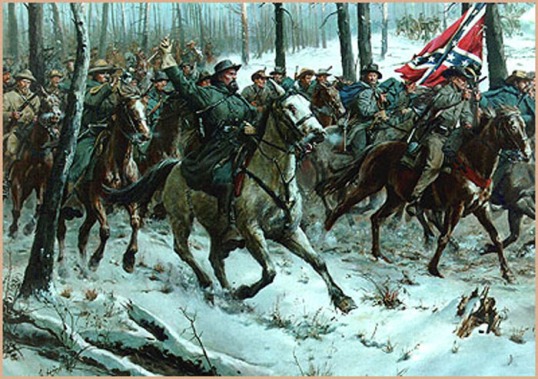 There has been a lot of controversery surrounding General Nathan Bedford Forrest. Some say he started the Ku Klux Klan, which is untrue. In fact, General Forrest called for the KKK to disband after the group became too violent. Another false assumption is that he was a cruel slave owner. He was a product of his time, and although he owned slaves, he never abused them or split up families. In fact, his slaves adored him so much that they fought with him during the Civil War. They even stayed with him after the war and mourned his death. General Forrest strived to bring the races together after the war ended.

Here a few excerpts from my book, Horses in Gray, which describe how General Forrest treated his slaves.

The Thirty Horses of Forrest

Those hoof beats die not upon fame’s crimson sod,

But will ring through her song and her story;

And his dust is our ashes of glory.1

Nathan Bedford Forrest often stated that he was “a horse ahead”2 at the end, meaning that he had thirty horses shot out from under him and killed twenty-nine men during the course of the war. It is virtually impossible to trace all thirty horses, since at times Forrest appropriated a horse on the spot. On one occasion, he ordered a Union officer to dismount, got on the officer’s horse, and rode away.

On June 14, 1861, Forrest, who had remained silent on the issue of secession, walked into the headquarters of Capt. Josiah White’s Tennessee Mounted Rifles and enlisted as a private. His brother, Jeffrey, and son, Willie, enlisted with him. The Forrests were ordered to Camp Yellow Jacket, a training camp sixty-five miles north of Memphis. These troopers in training would become the famous Seventh Tennessee Cavalry, which fought until the end of the war under Forrest’s leadership.

John Milton Hubbard was a private in Hardeman’s Avengers, which would later be attached to the Seventh Tennessee Cavalry. He was stationed at Camp Yellow Jacket and remembered meeting Forrest: “Two cavalry companies from Memphis were in camp near us—Logwood’s and White’s. In riding near these one day, I met a soldier speeding a magnificent black horse along a country road as if for exercise and the pleasure of being astride of so fine an animal. On closer inspection, I saw it was Bedford Forrest, only a private like myself, whom I had known ten years before down in Mississippi. I had occasion afterward to see a good deal of him.”3

In October, Forrest was given command of a regiment and named it Forrest’s Tennessee Cavalry Battalion. He posted advertisements in the Memphis Appeal, calling for “five hundred able-bodied men, mounted and equipped with such arms as they can procure (shotguns and pistols preferable), suitable to the service. Those who cannot entirely equip themselves will be furnished arms by the State.”4

In its editorial columns, the Memphis Appeal supported the notice: “To Arms! We invite attention to the call of Col. N.B. Forrest in today’s paper. There are still hundreds of young men in the country anxious to engage in the military service. Those whose fancy inclines them to the cavalry service will find no better opportunity to enlist under a bold, capable and efficient commander. Now is the time.”5

Part of Forrest’s command included an escort company of between forty and ninety men, which Forrest referred to as his Special Forces. Among these troopers, who were the finest, most elite soldiers in his cavalry, were eight of Forrest’s slaves. 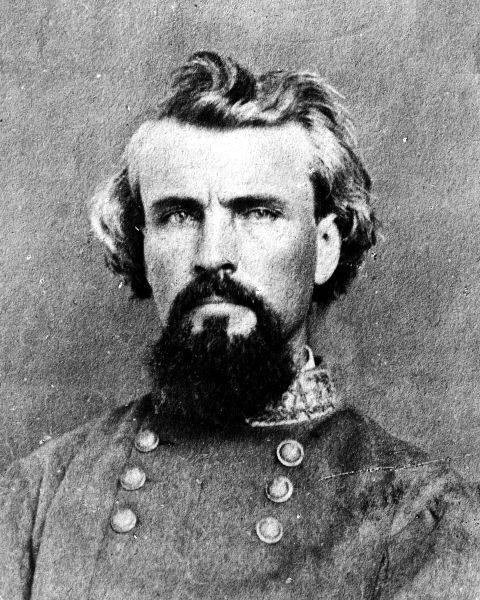 And in another excerpt:

After the war, Forrest set up housekeeping with his wife, Mary Ann, near Memphis. In August 1866, Federal cavalrymen rode past Forrest’s house. King Philip, who was grazing in the front yard, saw the blue coats and instantly recognized them as the enemy. Watching the men dismount and start toward the house, King Philip charged at them with teeth bared, head and tail raised, and front feet flailing. He did not stop until he had chased every Federal soldier from the lot. One of the cavalrymen who had been injured by the horse declared that he would kill King Philip, but Jerry (Forrest’s previous body servant) rushed to the horse’s defense. “The Gin’ral,”58 as Jerry called him, emerged from the house, took control of King Philip, and had Jerry lead the spirited steed off to the stable.

Forrest passed away on October 29, 1877. He was buried in Elmwood Cemetery in Memphis, but in 1904 his remains were interred in Memphis’s Forrest Park. All of the sidewalks in the park were named after officers who served under him—except for one, which was named for his war horse King Philip. 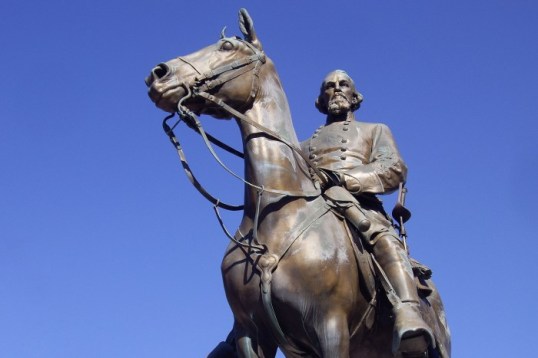 (The statue of General Forrest mounted on King Philip was illegally removed by the city of Memphis last month. Stay tuned for more details.)

3 thoughts on “The Slaves of General Forrest”