Traversing Europe, New Zealand, and the backbone of Eternity, Finders Keepers is a raunchy, sci-fi backpacking comedy that not only tackles friendship, sex, commitment, and desire, but also God, reincarnation–and what really happened to the dinosaurs!

But when a jar containing the Universe’s DNA falls from Eternity, these new friends find their loyalties put to the test . . . unaware that a motley crew from another realm is chasing them across the globe, with the fate of the Milky Way hanging in the balance.

Milo — the Universe’s Great Disruptor and ultimate gremlin — is creating havoc in the galaxy, with the Earth fluxing in and out of Existence. Which, of course, means no rest for best pals Jason Medley and Theo Barnes!

After a backpacking trip through Europe and New Zealand that — thanks to a jar of Cosmic Building Material they found — almost wiped out the galaxy once before, Theo now finds that his twin girls are teleporting, and Jason can’t tell which version of his life is real.

Joined by the mysterious Jamie — a down-and-out hotel clerk from Eternity — Jason and Theo reunite on a frantic, cross-country chase across America, praying they can retrieve that radioactive jar, circumvent Milo, and save the Earth from irrevocable disaster.

In author Russ Colchamiro’s uproarious sequel to Finders Keepers, he finally confirms what we’ve long suspected … that there’s just no de Milo quite like a Genius de Milo. 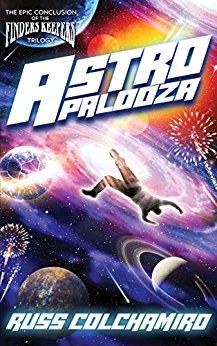 Astropalooza, the greatest celebration in the Universe, is just days away. And it’ll be a party like no other — namely, the last one ever!

Backpacking pals Jason Medley and Theo Barnes have already saved the Earth — twice! — nearly obliterating themselves in the process, thanks to a missing jar of the Universe’s DNA. But things are about to get a whole lot … worse.

Because thanks to our bumbling heroes, the next Big Bang is imminent, with two massive energy waves barreling through space towards one another. When they collide, it’ll be the end of Existence as we know it.

Can Jason and Theo finally return their radioactive jar before those waves crash, wiping away the Cosmos? Can they save the Universe … again?

With Astropalooza, author Russ Colchamiro brings you the epic conclusion of his hilarious Finders Keepers trilogy. So join the party. You’ll never have so much fun going out with a Bang!

Russ Colchamiro is the author of the rollicking space adventure, Crossline, the hilarious sci-fi backpacking comedy series, Finders Keepers, Genius de Milo, and Astropalooza, and is editor of the new anthology, Love, Murder & Mayhem, all with Crazy 8 Press.

Russ lives in New Jersey with his wife, two children, and crazy dog, Simon, who may in fact be an alien himself. Russ has also contributed to several other anthologies, including Tales of the Crimson Keep, Pangaea, and Altered States of the Union, and TV Gods 2. He is now at work on a top-secret project, and a Finders Keepers spin-off.

As a matter of full disclosure, readers should not be surprised if Russ spontaneously teleports in a blast of white light followed by screaming fluorescent color and the feeling of being sucked through a tornado. It’s just how he gets around — windier than the bus, for sure, but much quicker.

Q: What is your favorite quote, by whom, and why?

A: “When you do the things you need to do when you need to do them, the day will come and you can do the things you want to do when you want to do them.” – Zig Ziglar. Zig is one of my heroes. This quote epitomizes both a practicality that applies to every walk of life, but also speaks to a trust in the greater Universe- that things will work out … if you take care of what you need to. It means being proactive in your own success. Things don’t just ‘happen.’ You have to participate.

Q: What are you most proud of accomplishing so far in your life?

A: My wife and children. I have 7-year-old twins. A boy and a girl. My little ninjas. That we have a home filled with love, support, stability and laughter is immeasurable to me. My life isn’t perfect—far from it—and I’m not a perfect dad—far from it, but my family is my everything. That sentiment used to seem like a cliché to me. Now … it’s what matters most, by a mile.

Q: What inspires you to write and why?

A: Writing is what I do; being a writer is who I am. I simply have to write. Not writing simply isn’t an option for me.

Q: What genre are you most comfortable writing?

A: I’ve been a professional writer for more than 20 years, including as a journalist and an author, so I’m comfortable across various genres. Lately I’ve been focusing more on science fiction and fantasy, but everything I write has humor in it. I’m moving more now into crime fiction and mysteries, but the humor will always be there.

Q: What inspired you to write your first book?

A: During my early 20s I backpacked through Europe at a time when that wasn’t nearly as common as today. We’re talking 1994, so pre-Internet! I had one of those trips that in a real way changed the fabric of my life. Later, I took a two-week trip to New Zealand. I also had this wild scifi comedy concept that I was dying to explore. The two ideas—the backpacking and the scifi—fit together so well that I turned it into a 3-book series – Finders Keepers, Genius de Milo, and Astropalooza.

Q: Did writing this book teach you anything and what was it?

A: I’m now convinced of just how important it is to do ‘pre-writing’ and create outlines, like storyboarding a movie. The more I plan out the plot and sequencing of my books in advance of clacking the keys, the smoother and faster the writing process goes.

Q: What is your greatest strength as a writer?

A: Other people tell me that I have an easily accessible style, which is intentional. My approach is to welcome readers into my worlds, help them feel comfortable, and then take them on a wild ride.

Q: Have you ever had writer’s block? If so, what do you do about it?

A: Of course! It used to frustrate me to no end. Banging desks, yelling at the Gods, etc. But now I find that motion—walking my dog, working out … and talking it out loud … usually snaps me out of it fairly quick. I find that getting stuck is a result of impatience. Sometimes the best way to speed up is to slow down. And get away from your desk.

Q: Can you share a little of your current work with us?

A: I can’t, actually! I’m working on a top secret project, but once that’s done I’ll be staring my first full-length Angela Hardwicke book. She’s a private eye in that classic Sam Spade mold. She’s appeared in three of my books so far, but it’s time for her to take center stage. It’ll be in a scifi world, but the scifi isn’t the story. It’s Hardwicke being Hardwicke, doing that private eye thing. I love this genre. My plan is stick with it for the foreseeable future.

Q: How did you come up with the titles?

A: I spend a lot of time on the titles. Sometimes they come straight from the book itself, but I always a title that grabs you and doesn’t let go. Finders Keepers, Genius de Milo, Astropalooza, Crossline, and Love, Murder & Mayhem.

Q: Who designed the covers?

A: Rich Koslowski is a good friend of mine and an award-winning comic book creator. He did the cover for Finders Keepers. My pal Roy Mauritsen has done my last three covers, and, if I’m lucky enough to keep working with him, will be doing my covers going forward.

Q: Who is your publisher?

A: Crazy 8 Press. We’re an author’s collective. I’m a member. We have about 60 or so titles between us all, mostly scifi, fantasy, and humor. http://www.crazy8press.com

Q: What books have most influenced your life?

A: Farenheit 451, The Sirens of Titan, Lamb, Jitterbug Perfume, The Catcher in the Rye, The Great Bridge, Truman, Watchmen, Body of a Girl.

Q: What contributes to making a writer successful?

A: Each writer needs to decide for him or herself how they define ‘success.’ I can’t do that for them. For some it’s being a best seller, for others it’s simply completing a story. For others it’s somewhere in between. It’s a personal journey.

Q: Do you have any advice for writers?

A: Write every day. Don’t worry about whether you think it’s ‘good’ or ‘bad.’ Just write. If you stick with it, you’ll start to improve, and, hopefully, improve a lot. Also … ask only a few trusted readers to review your work and provide honest feedback, with notes that you can apply. Doesn’t mean you’ll agree with that they say, or want to hear it, but if you don’t share your work with anyone, or only give it to readers who tell you what you want to hear, chances are you won’t get very far.

Q: Do you have any specific last thoughts that you want to say to your readers?

A: My books are loads of fun. If you want to have a great time, you might want to check mine out!