Racehorses and the Civil War 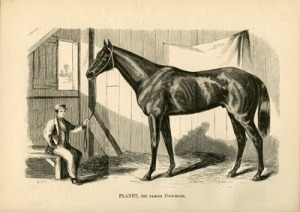 Many racehorses were used during the Civil War. My new book, Horses in Gray, discusses this topic. At the start of the war, Southern gentry thought that thoroughbreds would outperform other breeds, and thus assure victory for the Confederacy. Southern soldiers brought their steeds with them, and most were nimble, well-bred stock from Virginia and Kentucky. However, it didn’t take long for both armies to figure out that thoroughbreds were too flighty and unpredictable under gunfire, so they switched primarily to Morgans, Percherons, and Saddlebreds, and used various other breeds as well.

Thoroughbreds were mostly ridden by commanding officers after that, to give them the appearance of dignity and nobility. General Grant’s horse, Cincinnati, was a descendant of Lexington, a record-breaking thoroughbred. Grant was supposedly offered $10,000 in gold for Cincinnati, but he declined the offer. President Lincoln rode the horse on occasion, and reportedly enjoyed riding him very much. After Grant was elected president, Cincinnati went with him to the White House.

General Lee’s horse, Traveller, also had royal racing blood in his veins. His lineage stretched back to English racehorses; from Diomed, to Sir Archy, to Grey Eagle, which was Traveller’s sire. Grey Eagle was a famous, full-blooded thoroughbred, and set many records. Traveller’s dam was a half-bred grade mare named Flora. After the war, Traveller accompanied Lee to Washington and Lee University in Alexandria, Virginia, where Lee served as president. The general gave rides to the town’s children on Traveller, and everyone could set their timepieces to the punctuality Lee displayed when riding Traveller through town.

On this date in 1973, Secretariat won the Kentucky Derby. It was the first of Secretariat’s Triple Crown victories. It should be interesting to see how American Pharoah, last Saturday’s Kentucky Derby winner, does in his two upcoming Triple Crown races. Thoroughbred racing was a very popular sport in this country since its birth, and fortunately, still is today.