Sunday, were amazed when they discovered that the animal already bore injuries caused by musket ammunitions from the Civil War era. A total of 9 spherical projectiles was found, and the various tests and analysis realized on them have confirmed that they were indeed fired at the animal in the 19th Century.

Nine of the wounds on the animal are believed to have been caused by Enfield Pattern 1853 rifle-muskets. These old injuries were concentrated around the animals tail and hind legs, suggesting that the reptile could have possibly been used as a target for shooting practice by Confederate troops.

The huge animal also bore five other bullet wounds from three different calibers of hunting rifles, as well as many dents and scars, which shows that it survived many firearm injuries in the past. It did not however, survive the six .50-caliber bullets fired at him by the group of amateur hunters from Jackson, who were finally able to take it down. 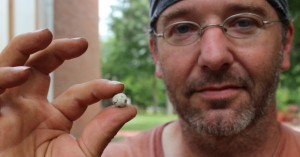 Thanks to Chuck Bond and Dean Burchfield for sharing this news item with us.