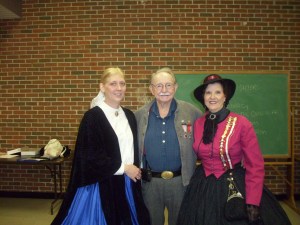 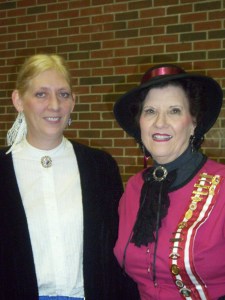 This morning I had the privilege of attending the Horn Lake Library with two of my dear friends, Mr. and Mrs. Lynne Herron, where we gave a presentation about the War Between the States to approximately 200 children. It was a lot of fun, and the kids were great! They were all very well-behaved, attentive, and curious about what people 150 years ago lived like.

Our presentation included performing several Civil War songs. Miss Dorothy talked about our period clothing and the language of the fan. Mr. Lynn discussed what a typical soldier in the army had to endure, and he brought along Civil War paraphernalia for the kids to experience, including a cannon ball, bullets, cooking utensils, and weaponry.

We gave each one of the kids a piece of hardtack. Most said they liked it! The event was the first in a series that we plan to give as living history lessons to local school children, as well as Seniors in Action and other groups.

Like Loading...
Posted in Uncategorized and tagged Civil War, Horn Lake, Miississippi, Sons of Confederate Veterans, United Daughters of the Confederacy, War Between the States